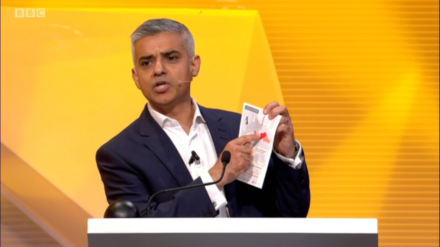 Last night was the England game in Saint-Etienne. Tonight was the Brexit match at Wembley Arena. It was only three-a-side this time, and the referee was a 77-year-old man in a suit but, at times, the 6,000-strong crowd seemed a lot more lively.

This fixture only comes around once every 40 years, after all, rather than every four. And it lasted longer – a full two hours. Amid slogans, scares and an awful lot of cheering, the Remain campaign seemed to score a very narrow win.

It was a night, however, when Labour figures on both sides of the debate landed some major blows. And Boris blustered. He always blusters, but this time his breathless answers and rampant sloganeering seemed to go down with far less impact.

If he was meant to be the star player for the Out team tonight then those tactics backfired initially. Instead it was Gisela Stuart, the most prominent Labour Leave campaigner, who got the battle under way with a couple of EU-damning zingers like “the only continent with a lower growth rate is Antarctica”.

She was one of three figures from Britain’s left, alongside Sadiq Khan and Frances O’Grady, general secretary of the TUC, who took on the Tories. No sign of Nigel Farage, thankfully, but we did see some of the few instances of red-on-red battle in a political war which has been dominated by Conservative in-fighting.

Khan, the new London mayor, was a strong performer, as you would expect, but for viewers who don’t follow every move in politics then the discovery of the night might have been O’Grady. Clearly not as polished as some of the full-time politicians, she was criticised heavily on social media but, to me, she spoke powerfully and passionately. And she skillfully took on the flag-waving of the Leave campaign’s economic argument with the put-down that “I’m proud of being British but there is nothing patriotic about putting peoples’ jobs at risk”.

This line of argument, which undoubtedly exposed one of the biggest weaknesses of the case for Leave, featured heavily in an evening split into three sections: the economy, immigration and Britain’s place in the world.

But it was the issue of immigration, of course, that prompted some of angriest and most revealing exchanges. And, surprisingly, the Leave campaign seemed to come unstuck, even though the flow of people coming to Britain has been one of their preferred issues.

Khan was able to make the case that “immigration has got to be controlled, but leaving the EU isn’t the answer,” but Stuart, strong at the start, was met with groans when she failed to answer a direct question about whether the Outers had ever promised to reduce numbers. It seemed a needless slip – when the Leave campaign has endlessly repeated the “take back control” slogan then it seems pretty obvious they are trading on some voters’ desire for lower immigration.

Stuart, regardless, cut a dignified figure, as well as a resolute one. She, like fellow Brexit-backer Andrea Leadsom, told the crowd she was speaking “as a mother”. Meanwhile Boris struggled to get his points across despite ever-longer answers. On the crunch issue of immigration, the former London mayor was reduced to spluttering “I’m a Turk” when the audience mood soured.

For his successor, Khan, it looked a relatively comfortable two hours’ work. Perhaps that’s an indication his strength after triumphing amid the buckets of bile poured on him by the Tories during the London election race.

For most of tonight, Khan seemed to get through calmly but his performance was bookended by two moments of vigour. First, after weeks of Leave taunts about the In crowd’s doomsday warnings, Khan sent their own slogan back to them with interest: “It’s not Project Fear, it’s Project Hate”. For added effect, he brandished an Out leaflet to denounce their “scaremongering” over the prospect of Turkey joining the EU.

Then, after a tussle with Stuart over how much Britain could contribute to Nato if it left the EU, he shouted back, voice rising “Why are you a quitter… We’re better than that.”

For a man used to sailing serenely through some extraordinarily bitter debates, these were a couple of stand-out moments of confrontation. Will it work? The Remain campaign has no choice but to hope so. Laying down a challenge to avoid being a “quitter” is about as punchy as it gets for them, given their argument is essentially based around the defending a tweaked version of the status quo rather than an exciting – or frightening – leap into the unknown. If we learnt one thing about political arguments tonight then it is that you need a snappy way of summing up your own view and rubbishing that of your opponents. The Brexit group certainly has it with their twin slogans of “take back control” and the ridiculing of “Project Fear”.

It was a tightly-fought event but one that should not harm Labour. The contributors from the left largely steered clear of the cold-eyed fury with which Tories have attacked other Tories. Instead, Khan chided Stuart saying “Gisela, you should know better”. By contrast, Boris was utterly skewered by Ruth Davidson, leader of the Scottish Conservatives over the issue of – what else? – employment by saying “your decision could cost someone else their job”.

The outcome of Thursday’s vote will be incredibly close. If tonight had been a football match, it would have been decided by penalties, with Remain edging it. If the Brexit camp were to achieve the rare feat of triggering a major change in a referendum, then they needed a clear win from the debate. They didn’t get it. Both sides had moments, on job security and immigration, that cut through to the public. But, after the adrenaline has worn off, I think the players from the Remain team will sleep slightly more soundly.