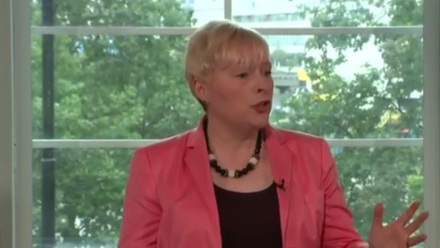 Angela Eagle today urged Labour supporters to choose “hope not grievance” as she launched her bid to oust Jeremy Corbyn.

She pledged to provide unity amid “dark times” for the party and told members she was “ready to serve”.

The former shadow Business Secretary was backed by a series of former shadow Cabinet members and ex-Labour ministers as she dismissed suggestions she was a stalking horse candidate by declaring: “I am here to win. I am not going to stand back and allow Britain to become a one-party Tory state”.

Eagle was speaking on another frantic day in Westminster politics. Her launch was held as:

Eagle launched her leadership bid in central London today some two weeks after she and a wave of colleagues resigned from the shadow Cabinet.

In a confident performance she aimed a series of barbs at Corbyn and vowed she was up to the task of providing stability for Labour and leading the country.

“Jeremy Corbyn is unable to provide the leadership that this huge task needs. I believe I can.

“I am not a Blairite, I am not a Brownite and I am not a Corbynista. I am my own woman – a strong Labour woman.

“I love my party and I love my country. We are at a crossroads and I am ready to lead.”

After momentarily looking nervous, Eagle struck a relaxed tone while fending off questions with a series of trademark one-liners.

When asked how she would gather support from the left of the party, and claims she was a “warmonger” given her vote for the invasion of Iraq in 2003, Eagle pointed out that her nomination papers for last year’s deputy leadership contest were signed by core Corbynista John McDonnell.

Eagle was introduced by former Labour deputy leader Harriet Harman. Several other big-hitters looked on in a show of support including Alan Johnson and Margaret Hodge as well as MPs from the 2010 and 2015 intakes such as Emma Reynolds, Dan Jarvis and Wes Streeting.