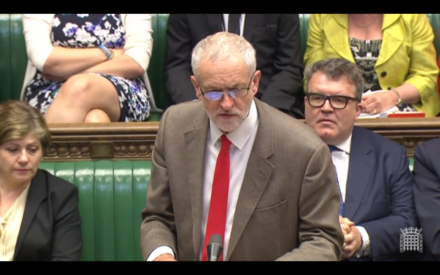 Jeremy Corbyn has suggested the Blair government misled Parliament in the run-up to the Iraq War, after the Chilcot Report concluded that claims about Saddam Hussein’s weapons of mass destruction were not justified.

In a speech responding the conclusion of the Iraq Inquiry, an angry Corbyn said the consequences of invading Iraq will be felt “for decades to come”, and demanded a War Powers Act to ensure parliamentary scrutiny of decisions to invade in the future.

“We now know the House was misled in the run-up to war and the House must decide how to deal with it 13 years later,” he said.

“Quite bluntly there are huge lessons for every one of us here today. We make decisions that don’t just have consequences in the immediate years but go on for decades.

“The consequences of those will live for all of us for decades to come.”

Chilcot and his panel stopped short of accusing Blair of any deceit in today’s report. The former prime minister pointed to key passages of the 2.6 million-word document which said there was no “falsification” of intelligence or “deception” of his Cabinet colleagues.

Today his successor, Corbyn, claimed the Chilcot Report confirms the Iraq War caused a “fundamental breakdown” of trust in politicians, and referenced the strength of public opinion against intervention in 2003.

He went on to imply the UK’s invasion and occupation of the country, along with the US, was the root of some threats and instability still experienced today.

“The decision to invade and occupy Iraq in March 2003 was the most significant foreign policy decision by a British Government in modern times. It divided this House and set the Government of the day against the majority of British people and against the weight of global opinion.

“The war was not in any way a last resort. Frankly it was an act of military aggression launched on a false pretext and has long been been regarded as illegal by the overwhelming weight of international legal opinion.

“It led to the death of hundreds of thousands of people. The occupation unleashed a lethal sectarianism that turned to a civil war. Instead of protecting security at home and abroad the war fuelled and spread terrorism in the region.

“Sunday’s suicide bomb attack in Baghdad that killed over 250 people – the deadliest so far – was carried out by a group whose origins lie in the aftermath of the invasion.

“By any measure the Decision to invade Iraq has been for many a catastrophe.”

The Chilcot Report, which was commissioned by Gordon Brown in 2009, includes harsh criticism of Tony Blair, saying his assurances to MPs that Iraq possessed WMDs was “not justified”.

Blair used a statement published earlier today to argue that the report concludes “there was no falsification or improper use of Intelligence” and “no deception of Cabinet”.

He is set to issue a longer response this afternoon.