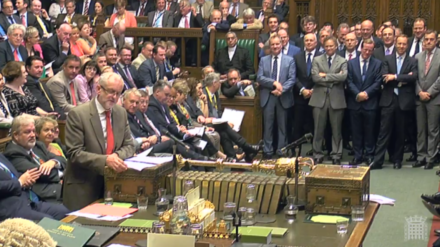 It’s Theresa May’s first PMQs and Corbyn took the chance to expose the chasm between her words and actions from her seven days in office. However, Corbyn was still dogged by internal divisions within Labour – making May look stronger and stateswomanly in comparison.

He rightly attacked May for the hypocrisy of using Ed Miliband’s egalitarian rhetoric, speaking out against social justice and other inequalities upon moving into 10 Downing Street, but then taking the helm at a viciously right-wing government.

Corbyn scored a blow when he pointed out that any promise to “fight burning injustice” did not sit comfortably with May’s final act as Home Secretary – to “shunt the Orgreave inquiry into the long grass” rather than face the facts of the battle.

He interrogated May’s commitment to support those who have jobs, but not job security.“Does that mean to those people that are worried about their future in work – I’m talking of the people who sent us here to serve them – does that mean she’s proposing to scrap the employment tribunal fees, or ban zero-hours contracts?” he demanded.

He went on to take up how May’s words do not match her actions on race. She was correct to point out that black people have worse life chances and suffer more violence, and Corbyn asked how Boris Johnson, who described black people as “piccaninnies” and said President Obama is anti-British because of his Kenyan heritage, can carry out his role as Foreign Secretary.

However, the Labour leader also had to deal with internal divisions as well as Tory failures. He is, by now, used to jibes about fights in the Labour Party and May surprised no-one by ridiculing Corbyn’s lack of support from his MPs, saying “I suspect there might be many members on the other benches who have an unscrupulous boss, a boss who doesn’t listen to workers, a boss who forces some workers to double their workload or a boss that bends the rules to serve his own agenda – remind you of anybody?”

Instead of getting flustered, Corbyn returned to the issues Labour holds most important, saying “I know this is very funny for all Conservative members but I don’t suppose there are too many Conservative MPs but have to go to a foodbank to supplement their tables every week.”

It was a mark of the differences between the two party leaders. May’s opposition to inequality is inauthentic bluster, while the Labour leader is genuinely opposed to the oppressive outcomes of austerity. He is still steadfast in his beliefs and values. Corbyn’s commitment to narrowing gaps between rich and poor shines through the comedy punch-ups of PMQs. While this won’t bring back the confidence of the 172 MPs who voted against him last month, it is a reminder of why he was elected by members in the first place.

However, Corbyn suffered an embarrassment from Jamie Reed, a Labour backbencher and vocal critic of the leadership. He said May demonstrates “wholehearted support and endorsement of official Labour party policy on Trident. It is such a refreshing change to hear that from the despatch box.”

Reed’s comments highlighted the gulf between leader and MPs. Corbyn is the favourite to win the leadership election but this does nothing to manage the disagreements between him and the backbenches. The leader’s role in PMQs is to lead the battle against the Tories, but he does not look like a leader when backbenchers are so disenchanted.

Corbyn and May’s exchange was more of a sign of how each leader is performing in their roles than genuinely answering any questions. May sadly was able to avoid the important issues of inequality by attacking Labour’s turmoil, and Corbyn has few cards to play in the face of these jibes.

Labour should run rings around the Conservatives on questions of social justice, but the new Prime Minister won cheers when Corbyn congratulated her on being the UK’s second woman in the top job. May proclaimed “I’ve long heard Labour ask what the Conservative Party does for women – we keep on making them prime minister!”

If Corbyn is returned in his position, he will have to expect more PMQs sessions like this – managing dissidents and jokes as well as opposing the Tories. It remains to be seen if his commitment to exposing the failures of austerity can withstand attacks from both sets of benches.