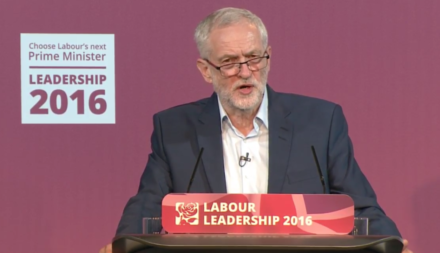 Nearly 20 years on from when Tony Blair shared drinks and jokes Noel Gallagher and Mick Hucknall at Downing Street, Jeremy Corbyn has rightly taken Labour back to a time when we took the creative industries seriously.

The “cool Britannia” image in government came from a sustained investment in the arts, kicking off lottery funding for large cultural projects and introducing free admission for the national museums and galleries.

Corbyn could achieve something similar.The leader today unveiled a series of laudable policies – he’s committed to more money in schools, better skills training and and developing a creative apprenticeships – all of which will build the talent pipeline for the UK’s flourishing arts scene. Reversing Tories’ cuts to public spending in the sector will support jobs across the country too.

However, he has combined this with a commitment to “challenge corporate influence” in the arts. This could be a sound move for the leadership candidate if it was only about unions and did not have implications for private funding in general. Corbyn has not understood the detail of how the creative industries survive. Corporate money is a huge contributor the the arts and works with, not against, public funding.

The background to the pledge comes from a dispute in the National Gallery last year. The art museum was hit by a strike lasting over 100 days from workers following the outsourcing of visitor services to a private firm, which union PCS tried to challenge. It was a tough battle which they lost, but the unions did secure reassurances over the working conditions of staff.

Yet pushing against the outsourcing of workers, where Labour is right to stand with the unions, is not the same as opposing private money in museums and galleries.

Changing the funding mix for public galleries at this time would only lower the levels of funding for this vital industry when Labour should be promoting the contributions it makes to the economy.

In the creative sector the two go hand in hand. Public provision is usually the bedrock of private giving, and companies and individuals rarely want to be the sole backers of any artistic project. Private money is, in many instances, a top-up for arts the public has a stake in.

Corbyn is right to stand with the unions on the disputes about outsourcing – but these came as a result of cuts from government funding, not from private money in the sector. This isn’t to say we cannot be critical of individual sponsors, and it’s undeniable that Corbyn’s policies are good in general, but he is missing out on the detail which would show he understands this important part of our economy.

Labour has lost its way on the creative arts since the financial crash – our commitments to rebalancing the economy have focused on manufacturing instead. Yes, reindustrialisation is worthy of our attention, but we cannot ignore the importance of arts and culture.

A post-industrial economy will, overall, include more service sectors and Labour should embrace this.

The creative industries have grown faster than the rest of the economy every year since 2008. In 2015, they were only outpaced as the fastest-growing sector by housing, which occurred a result of the infinitesimal levels of housebuilding in the years beforehand.

This doesn’t only benefit those who work in the arts – Arts Council England research should that for every pound invested in arts and culture, an additional £1.06 is generated in the economy – a return which feeds into all other areas of demand.

Labour has the opportunity to lead on policy surrounding the creative sector. A post-industrial economy will see tens of thousands employed in the area, and these workers will need a strong voice to stand up for secure working conditions, a living wage and support from the government.

We can grow this area of the economy and support those who work within it. Today Mark Rylance, Frankie Boyle, Josie Long, Michael Rosen, Ken Loach all backed his plans in a modern echo of New Labour’s celeb credentials.

Yet, despite the acclaim, Corbyn must bear in mind that stance against private funding of museums fundamentally misunderstand what would support the industry at this time.