This morning Jeremy Corbyn launched his digital democracy manifesto, which can be read here. The full text of his speech is below: 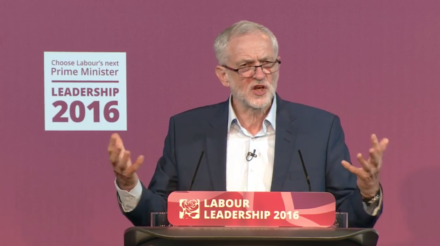 “Thank you everyone for coming here today.

“Twenty years ago, this speech would have been prepared, at best, on a basic desktop computer. Research would have required wading through stacks of paper notes. Live transmission would have limited to big TV channels. If you liked the content and wanted to campaign for me, you would have to attend a physical phonebank, with landlines.

“Today, it can be delivered to an audience of millions at the touch of a button. As the conversation continues on social media, millions of ordinary people gain a voice, however piecemeal. Our campaigns are run with big data and cutting edge software. You can phonebank from anywhere with an app, in whatever free time you have.

“We are pioneering techniques and innovations that will form the basis not just of this campaign, but Labour’s path to victory at the next general election.

“Britain has led the world in the development of technology. And it is exciting to be here today in East London, a place of so much innovation and creativity, to launch our campaign’s digital manifesto.

“The internet, and the development of smartphones and computers, has transformed our daily lives. I can call a friend on the other side of the world just by opening the Skype app on my phone. And we can access information like never before. We are long past the point when ‘google’ became a verb.

“Politics is changing too. The issues may not change that much – people want decent housing and decent jobs, they want access to education and opportunity, they want thriving public services and a society which works for the millions not just the millionaires. But the terrain on which opinions are formed is changing.

“With the rapid advances in digital technology, data and information can become sources of inequality and exploitation as well as. It hasn’t been easy to ensure democracy always takes place online. This is why our manifesto we’re launching today seeks to democratise the internet.

“Let me take you through the manifesto.

“I don’t think it’s fair that people living in London get to enjoy 4G internet connection wherever they go, when in Wales, Cornwall and other places in the UK, they can’t even get a single bar of reception.

“Across the country, outside of the South East and especially in rural and remote parts of the UK, people are struggling with slow or no internet. In today’s connected age, this inequality of coverage is not trivial – it is a barrier to learning and to business opportunities, and it is a source of social and economic isolation.

“To improve connectivity we want to see a Universal Service Network that will deliver high speed broadband and mobile connectivity for every household, company and organisation in Britain from the inner city neighborhoods to the remotest rural community.

“The cost of this is estimated at £25billion, and would be covered by our National Investment Bank.

“Secondly, as part of Labour’s plans for a universally accessible National Education Service, we will create a free-to-use online hub which we’re calling an “Open Knowledge Library”, a digital repository of lessons, lectures, curricula.

“We will foster the cooperative ownership of digital platforms for distributing labour and selling services. The National Investment Bank and regional banks will finance social enterprises whose websites and apps are designed to minimise the costs of connecting producers with consumers – in transport, accommodation, cultural, catering and other important sectors of the British economy.

“In the new sharing economy, we will reform copyright laws to ensure that cultural workers are paid properly for their labour. And we will introduce new laws guaranteeing a secure employment contract and trade union membership to everyone who earns most or some of their livelihood from digital platforms.

“We are also interested in the idea of developing a voluntary scheme that provides British citizens with a secure and portable identity for their on-line activities. The Digital Citizen Passport will be used when interacting with public services like health, welfare, education and housing.

“To ensure everyone has access to software needed for programming, we will encourage all publicly funded software and hardware to be released under an Open Source licence.

“To protect us from unwarranted surveillance, and to protect our individual and collective freedoms, the next Labour government will introduce A People’s Charter of Digital Liberties, following a public consultation with people and parties across the political spectrum.

“Finally, we will use technology to in a broader policy to devolve and open up British democracy. We will organize online and offline meetings for individuals and communities to deliberate about pressing political issues and participate in devising new legislation. And if we can be sure of its reliability, we will look to introduce online voting in elections.

“From travelling all over the UK and meeting thousands of people over the past year, I know there is a huge thirst for people to get more involved in devising policy making and having a say in politics.

—
“Labour have now lost two successive general elections. As this and other detailed policy announcements show, we have a plan for Britain. But in order to implement that plan, we need to be in power.

“We will not win elections solely by relying on the methods and strategies of the past.

“And I’m pleased to say that our leadership campaign, is leading the way in harnessing the advances of new technology so that we can organise political campaigning like we’ve never seen before in Britain.

“Our digital phone canvassing app for example, inspired by the Bernie Sanders campaign in the US, has already been used by thousands of people in our campaign.

“The creativity of the networked young generation is phenomenal. We have tens of thousands of young volunteers on our campaign all over the UK taking part in this digital revolution.

“The challenge is to now take this forward to the next general election. Labour under my leadership will utilise the advances of digital technology so that we can mobilise the most visible, targeted and effective General Election campaign in British history.

“Together, we will rebuild and transform Britain so that no on and no community is left behind.