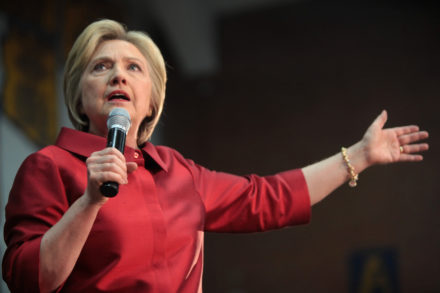 When Hillary Clinton made her nomination speech I found myself glued to the screen, watching a defining moment for the feminist movement across the globe. Of course there have been female leaders all across the globe, from Israel to Chile, from Bangladesh to South Korea. But she was the first female nominee of a major party in the USA. Aside from its symbolic importance, part of the draw of Hillary’s nomination is that it comes at a strange moment for women in the UK.

Over recent months the scale of abuse towards female Labour politicians has been unprecedented. They’ve faced threats, vile insults and inflammatory language. Too many have reported this, including Angela Eagle, Luciana Berger and Jess Phillips. It cannot go on like this.

At the same time, many are disappointed that – as the Tories are on their second female Prime Minister – we failed to have a woman on the ballot in the leadership contest. Likewise, there are no female Labour mayoral candidates, and this is utterly frustrating.

Let us be clear: we must promote more women into power.

As women represent half of the population, I have always failed to understand the definition of “women’s issues”. How could you define something simply as a “women’s issue” if it affects 50 per cent of people living in the country? Equal representation is not a “women’s issue”, it is about reality and power.

At present women are still lagging behind, in politics as in business. Maternity discrimination is still a reality for too many, worsened by the tribunal fees which deter female employees from doing something about it.

The alliance between the left and the women’s movement has led to some of the biggest social changes around the world. From divorce to abortion, from workers’ rights to maternity pay, it has been the left that has pushed for real equality – and (although not without struggles) has mainstreamed feminism into its politics.

It is now time to reaffirm this link in our politics on the left. It is crucial – not just for women but for the economy, for social cohesion, and for growth and prosperity.

Sadiq Kahn has got it right with his leadership team, with women in charge of key briefs such as transport and policing.

I was pleased to see Owen Smith’s firm commitment to equal representation. He understands that it is not easy to be a woman in the Labour Party right now. He has plans to promote equality at every level – such as keeping all-women shortlists (AWS) until our parliamentary party is at least 50 per cent women. All of this is key to ensure that we move forward. Likewise, I was pleased to see that he has mainstreamed gender in the workers’ rights manifesto he launched last Tuesday. Women’s employment rights are everyone’s rights. They create better workplaces and a better society for all.

Next, I hope we will articulate how having more women in the economy, more women in innovation, more women in science and technology will unleash the potential of this country. Now more than ever, after Brexit, with a Japan style flatlining economy and low productivity, we need a new radical vision for Britain – and women are key to achieving this.

Progressive policies and representation go hand in hand, and Labour must commit to both. Women won’t give blank checks and will be vigilant. More than that, they will want to be there, as women on the left, deciding the future of post Brexit Britain.

The left is in crisis all over Europe, and populist moments on all sides seem to be thriving. I believe this was inevitable, with so many being left out of globalisation and ignored by mainstream politics.

Promoting women in politics and in the economy is not an afterthought or a tick the box exercise – it is key to how we reshape our party and return to government. It is a leadership issue, and there’s no question about it. It was reassuring to hear Owen saying that he would have used AWS to ensure at least one Mayoral candidate was a woman. To me this means that he gets it, and that is why I will be voting for him to be the next Labour Leader.

View all articles by Ivana Bartoletti