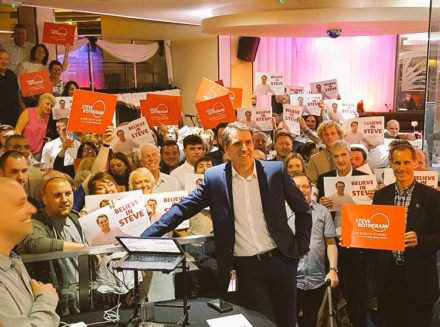 The selection of Steve Rotheram as Labour’s candidate to be Liverpool metropolitan mayor is the latest in the line of MPs trying to move away from Westminster to take on beefed-up regional briefs.

Elected to parliament in 2010, Rotheram is generally considered to be on the left of the party, winning the backing of unions like the CWU in the mayoral contest. He’s previously been Lord Mayor of the city and served as a councillor after training as a bricklayer as a teenager.

He nominated his friend Andy Burnham for leader last year, along with Angela Eagle for the deputy’s contest. However, he recently threw his weight behind Corbyn’s re-election bid, addressing the 5,000-strong crowd at the leader’s Liverpool campaign rally and urging other MPs to unite against the Tories.

Rotheram spent the previous ten months as an aide to Jeremy Corbyn in Parliament, being the primary link between the leader and backbench MPs. Before that, he secured his left-wing credentials in January 2015 by writing to then leader Ed Miliband, along with 14 other MPs including Corbyn, John McDonnell and Diane Abbott, to urge him to step up his opposition to austerity.

He previously sat on Labour’s national executive committee (NEC) as a backbench representative, but was booted off when a whopping 188 MPs voted that his role as Corbyn’s parliamentary private secretary (PPS) counted as a frontbench position.

The NEC has distinct places for different elements of the party structure, with seats for frontbenchers, backbenchers, unions and lay members. Rotheram already held his NEC place when he took the PPS role, having been appointed by MPs in July 2014, and the move to eject him was seen as just one part of the battle by centrists for control of Labour’s ruling body.

The mayoral candidate has also been a tireless campaigner for justice for families affected by the Hillsborough disaster, where he has joined Burnham is standing up for the local community.

He was one of the organisers of the 2012 charity single He Ain’t Heavy, He’s My Brother to raise funds for the legal costs of families pursuing justice after the tragedy.

Rotheram was present in the South Yorkshire football stadium on the day of the disaster in 1989, and he has previously spoken about his experiences, saying “I’m one of the fortunate ones, as I swapped my Leppings Lane ticket for a stand seat 15 minutes before kick-off. If I can go from being a brickie in Kirkby to the Lord Mayor, who knows what these 96 people may have achieved in their lives?”