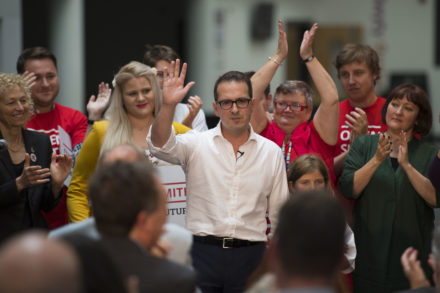 Maintaince grants abolished, £9k tuition fees with another increase coming over the next few years, an ongoing housing crisis, over 600,000 of us unemployed – it’s not hard to see just how much the last six years of Tory government have cost young people.

I was part of that first group of students to have our EMA cut and then pay £9,000 fees. When the Tories took office, it felt like the damage had been done to us overnight. For kids growing up today, from working class backgrounds like mine, it really does make a difference whether it’s Labour or the Tories sat in Downing Street.  Growing up under a Labour government, I was helped by policies, not placards.

It’s obvious to most people that Jeremy Corbyn means well and wants the best for young people. I’m on Labour’s soft left, but I can’t help but think that the longer Jeremy remains leader of the Labour Party, the more the cause of the left grows to be discredited in the eyes of voters. Just look at the polls.

For me, the problem isn’t that Jeremy can’t win a General Election, it’s that he doesn’t really act as if he even wants to win one. I fought hard campaigning for Labour in 2015. I wanted a Labour government last year, I want a Labour government today and I’ll want one in 2020 too. I just really want us to have a Labour government again, not a Labour opposition arguing with itself, miles behind the Tories in the polls, unable do anything for the country.

In this election, I don’t just want a Labour opposition leader, I want a Labour Prime Minister. That’s why I’m voting for Owen Smith.

Last month, I became the second in my family to graduate from university – the first being my sister. We wouldn’t have been able to achieve that without a Labour government which rebuilt our schools, which gave us EMA and which worked hard to get 50% of young people to university, making Higher Education for the many not the few.

If the public had elected a Labour government last year, fees would have been cut and grants would have been increased. The Tories have gone and done the opposite. Owen will scrap the broken tuition fee system that has been piling students and graduates like me with eye watering amounts of debt for far too long. He will guarantee an apprenticeship or a traineeship for anybody who wants one and he will replace the shocking £3.30 apprentice wage with a real Living Wage. He’ll build 300,000 new homes a year, and will reserve 50,000 of these for first time buyers under 30. His plan to allow young people to put aside part of their rent to pay a deposit on the place they were renting would open up the possibility of home ownership to me and thousands of people my age, and demonstrates exactly the kind of credible and radical Labour government which he will lead.

But what Owen understands is that he can’t do all this as Leader of the Opposition, he can only it by marching Labour into Downing Street at the next election and putting these pledges in place as the next Labour Prime Minister.

Today, our country finds itself in a political crisis. The Brexit vote was devastating for young people. We need a Labour Prime Minister who’ll fight for the best Brexit deal, not someone like Jeremy Corbyn who was ready to trigger Article 50 and drag us out of the EU the morning after the result.

My generation now finds itself fighting to save our future jobs and opportunities, to save ERASMUS and university funding. We didn’t vote for Brexit but we’ll have to deal with the consequences. The reality is that we went into the referendum not knowing what Brexit actually looks like. That’s why Owen is right that we should have another vote on the exact terms of Brexit.

Jamie Ali is Community Officer at Leeds University Union and former chair of Leeds Labour Students. He writes in a personal capacity.

View all articles by Jamie Ali