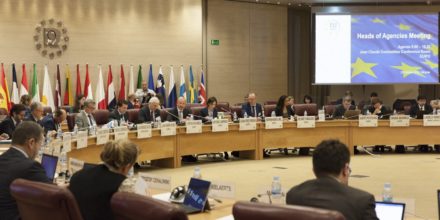 In the next few days, the government will have to decide whether the UK stays in Europol, a major plank of our security arrangements with the EU. This was one of the many issues that Labour MEPs discussed this week in the European Parliament with the Labour leader and MPs Keir Starmer, Emily Thornberry and Diane Abbott.

The discussion followed much cooperation between Labour MEPs and our new Brexit team, who in the past few days have put us on the front foot in scrutinising the hopeless Conservative approach to Brexit. This includes the beginnings of a sound practical strategy, a key motion in the House of Commons, and 170 questions – which provide a strong and effective start to the scrutiny of a government tasked with leaving the EU but ensuring the best possible deal and options for the British people.

This scrutiny, along with recent select committee appointments, gives cause for optimism. Labour MEPs – who continue to work hard as we remain full members of the EU – are engaged in a parallel process in the European Union, which will see a vote on the final deal taking place in the European Parliament, with British MEPs present. Labour MEPs are determined to work in partnership with all levels of our party in achieving the best possible outcomes and options for the people we represent. In this respect, the leader of Labour MEPs, Glenis Willmott – as the new chair of the NEC and member of the Shadow Cabinet – will play a pivotal role.

In the parallel process ending with a vote in the European Parliament, the practical work will be done by the Parliamentary committees leading to a final report by the European Parliament chief negotiator, Guy Verhofstadt MEP. Here, Labour MEPs hold two key committee chairs, justice and home affairs and international development, with myself and Linda McAvan MEP playing a preparatory role in this process as committee chairs.

At the heart of any scrutiny of Brexit will be the shift of the debate to more hard-edged themes, resolving the key issue of staying within the single market, and dealing consistently with the issue of free movement. Labour MEPs and indeed many levels of the Labour movement, including trade unions, understand the critical importance of staying within the single market for jobs prosperity and our future.

However, our scrutiny, our role in opposition, and our task on behalf of the British people will be to understand that the EU was more than these issues alone. Labour worked hard for years for the European Union on employment and social rights, values, development aid, research and security. That means lesser-known but vital elements of our jobs as MEPs will kick into action right away.

This very week, with virtually no reporting in the British press, the UK government will have to choose whether to continue its cooperation with Europol. Since the referendum, the UK government has already opted into five EU measures, and the decision to stay in or out of one of the most successful policing and security organisations anywhere in the world (which is headed by a Briton) will be a symbolic test of whether this government understands our current security and cooperation needs, and our future needs outside of the EU.

In the casual denigration and non-reporting of the EU over many years, our press in particular have done the British people a disservice in not reporting the huge added value that the UK receives from cooperation in fields such as justice and home affairs. Now comes the point where our UK “experts” will clearly state what is in Britain’s interests. Today, the National Crime Agency and virtually every police force in the country will call for continued cooperation or association with Europol, in addition to the many measures which have delivered faster and higher quality justice and security to the British people, from the reformed European Arrest Warrant, to the Schengen Information System (SIS II) – the most effective intelligence database of its kind anywhere in the world, which  helps us stay safe from organised crime and terrorism.

When it comes to Brexit, Labour’s scrutiny and opposition will be crucial now and in the coming months leading up to the triggering of Article 50. At stake will be nothing less than many of the significant gains the British people have obtained from the EU.

View all articles by Claude Moraes