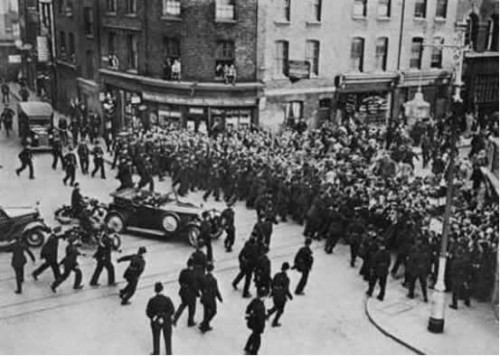 They shall not pass. These words, which served as the rallying cry in the fight against Mosley’s Blackshirts, still grace the red plaque near the entry to Cable Street in London today.

In the rich history of the British labour movement, the battle that took place there on 4th October 1936 has acquired a near mythological status. It is rightly celebrated as a great victory and is viewed by many as the day the tide turned in the fight against fascism in Britain.

It’s an event that touched the lives of my own family. My Grandmother lived nearby, in the heart of the Jewish community of the old East End. She was a witness to the battle and its aftermath. And other members of my family were participants – fighting for one reason, to defend their community against the politics of hate and division.

But despite its status in the progressive history of our nation, the Battle of Cable Street might never have taken place, and was the result of necessity and desperation rather than design.

When Mosley’s plan to march through the East End was announced, a deputation of the five East London mayors visited the Home Secretary directly to ask that the march be banned. When this request was refused the community itself campaigned to put a halt to the march, gathering a petition of over 100,000 signatures calling for a halt to the event.

In spite of the obvious threat to local residents, and the fierce opposition of the local community, the authorities sided with Mosley’s fascists and refused to take steps to put an end to their aggression.

In the face of this indifference, it was left to the community to defend itself. It was the great bonds of working class solidarity which won the day at Cable Street in the face of insurmountable odds. One of the organisers that day, the Communist Party stalwart Phil Piratin, wrote of how “people whose lives were poles apart, though living within a few hundred yards or each other; bearded Orthodox Jews and rough-and-ready Irish Catholic Dockers” came together against a common foe.

And it was the leadership of the labour movement which held these disparate forces together. Rooted in the local community, committed politically in opposition to fascism, Cable Street was one of the British Left’s finest hours.

Today, that solidarity and community spirit continues to be the only reliable deterrent against the forces of racism and reaction. As neighbourhoods change and the fraternal bonds of old shift and fray, that is a lesson we must hold onto.

As director of HOPE not hate I fought to combat the politics of the far right. I learnt first hand what my grandmother’s generation learned 80 years previously, that hatred and division can only be overcome by sustaining strong communities and by shared values of tolerance and respect. The words of my friend Jo Cox, that “we have more in common with each other than the things that divide us”, hold the key to building a world free from the politics of hatred and fear.

If there are still lessons to learn from Cable Street it is not just that fascism must be confronted head on, but that only solidarity can provide a cure to the politics of hate.

Only by nurturing the bonds between communities and working together to alleviate the conditions of poverty and resentment that allow fascism to fester can we ensure that the events of that bloody day in October are not repeated.

Throughout our history, it has been the labour movement that has best represented those aspirations and succeeded in delivering dignity and prosperity for working people.

After the divisions of the referendum and the increase in racism and bigotry, our movements historic mission has never been more important.

Ruth Smeeth is vice-chair of the Jewish Labour Movement and the former Labour MP for Stoke-on-Trent North and Kidsgrove.

View all articles by Ruth Smeeth