Liz Truss must “not stay silent” after the recent attacks on British judges in newspapers, Labour has demanded.

Richard Burgon, Labour’s shadow justice secretary, urged Liz Truss, justice secretary and Lord Chancellor, to “speak out urgently against the hysterical headlines of some papers and these attacks on British justice.”

Burgon’s call for an intervention on newspaper reporting comes after this morning’s front pages, with The Sun, Telegraph, Mail and Express all launching attacks on yesterday’s court ruling that article 50 can only be triggered by a vote of Parliament. 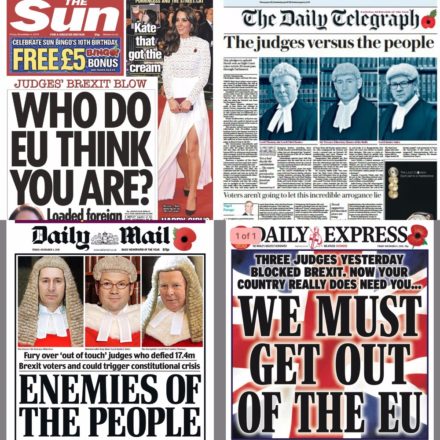 He said: “respecting the EU Referendum result is the right and democratic thing to do. Strong views were expressed by both sides.”

“Judges in the High Court are there to interpret the law regardless of their personal views and that it what they have done.”

“There is a constitutional process which must be followed. Some of the headlines in today’s newspapers personally attacking the judges who heard this case are unacceptable.”

“It is the Lord Chancellor’s job to uphold the independence of British judges.”

Numerous other Labour MPs have criticised the hysteria.

While Stella Creasy, MP for Walthamstow, posted on Instagram:

These headlines from daily mail reflect a venom which is now infecting our political and cultural life with its toxicity and threatens not just our present social cohesion but also our future freedoms. Whatever the relationship you want us to have with Europe, the debate about what next for our country must now also include how we renew and refresh our shared pride in our long cherished traditions of tolerance and freedom to dissent, as well as an explicit and consistent rejection of the attempts to use identity to silence debate or in this case harass someone doing their job. Hate is a gateway drug, as deciding one group can be vilified makes it easier to then move onto another – Britain has always had a proud history of rejecting such authoritarian and regressive behaviour and now progressives and patriots across our nation need to come together in common cause to defend it as the seed which nurtures our freedoms and social progress. Britain – we may face uncertain times, our political institutions may need radical reform to be up to the job but you are better than this and all of us have a duty and determination to say so to ensure the legacy to our children and grandchildren of this time is one of which we can be proud – It's time not to take our country back but to take it forward! #21stcenturyiscalling #bestofbritain #brexithaos