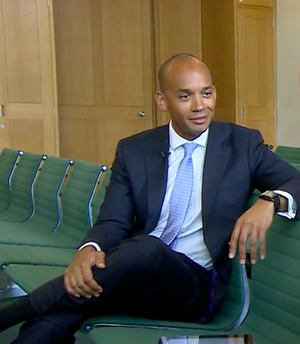 This is the message posted on his Facebook page today by Labour MP Chuka Umunna.

I still believe that by the strength of our common endeavour, working together, we have a much better chance of giving the next generation the best start than we do alone or by “othering” people.

Progressives all around the world are still coming to terms with the shock result of the US presidential election. In the UK the election of President-elect Trump followed the Brexit vote and the Labour Party’s defeat at the General Election last year – it seems like the bad news just keeps flowing. But I don’t think disillusion and despair are the way to respond or that junking our values and beliefs are the answer – indeed, never have they been more important.

The question is how to make our values and beliefs relevant to those who – like us – believe the system is broken, those who don’t think it delivers enough for those who work hard and play by the rules, and those who want to give the next generation in our families (like these fantastic young constituents of mine pictured) the best start in life.

Here are a few of my thoughts, now that the full details of the results have come in (it is by no means an exhaustive list) …

First, we must be careful not to over interpret the result. The winner takes all nature of the US presidential election can distort the reality of the support for the successful candidate. Although Trump clearly won the election with a majority in the Electoral College, he narrowly lost the popular vote – Hillary took 47.7 per cent of the vote (eerily similar to the 48 per cent who voted Remain) to Trump’s 47.5 per cent of the vote.

Much has been written about the parallels between those who voted for Trump and those who voted for Brexit, with a suggestion that the common thread is a support base of mostly male, blue collar workers in former industrial communities voting for Trump and Brexit. There is absolutely no doubt that globalisation (of markets, technology and the movement of people) has patently failed to deliver for nearly enough people in advanced economies, leaving a whole lot of people behind and disillusioned with the political process. However it would be a mistake for the UK Labour Party to respond to this by now focusing solely on a political message and set of policies aimed at this group of people, at the expense of other groups. Our task is to craft a political offer and a set of policies that can appeal to our existing base of support AND this group – people who share the same challenges and have all been let down – in order to build a voting coalition that can deliver a Labour Government …the best way to affect change in Britain.

Second, as with the Brexit result, the loss of the US Democrats has been decades in the making. As I have long argued, too often progressive politicians have talked about globalisation as if it is some unstoppable force and been far too complacent about its negative affects. For example, implicit in the arguments of the pro-globalisation lobby is that people should simply move to where the new industries are based and abandon their roots and their communities – this is wrong, looks at the world purely through the lens of economics and disregards people’s association with family, community and place. Also, clearly the movement of people across the globe has had an impact on people’s local communities – I think it is possible to address the effects of this without pandering to a prejudicial agenda.

Third, people’s discontent with the status quo has helped drive the desire for change and it is incredibly difficult to represent change if you put up a candidate who is a member of one of two families – the Bushes and the Clintons – who have been running the US since I was at school. The lesson for the Labour Party is not to incessantly dump on the records of the last Labour governments – which were of their time and transformed our country – but to acknowledge that the next one will need to look and feel very different both to the Labour Governments of the 1970s and to New Labour, if we are to have any hope of being the change people want to see.

Fourth, I think we have to be very careful in extrapolating conclusions about the racial dimension of the US result into a UK setting, which has a very different history of diversity and immigration. Whereas the US continues to struggle with its history of slavery (I note the ecstatic welcome of Trump’s victory by KKK head David Duke), the UK has a different history where we welcomed immigrants from the Commonwealth from the late 1940s and then had a further wave of immigration from the mid-noughties from mainly Eastern European countries. The two histories are very different so we have to be careful about drawing conclusions on race in the UK from all of this.

Finally, if the UK Labour Party is to provide an answer to these questions, it must rediscover its purpose (as my friend Jonathan Rutherford puts so well in his recent excellent long read in the New Statesman. I am very clear, Labour is the party of working people and it exists to ensure that whatever your background and whatever your start in life, if you work hard and play by the rules you should have the opportunity to do well and get on, with a good level of security. I still believe that by the strength of our common endeavour we have a much better chance of doing this together than we do alone or by turning in on ourselves and “othering” people. Now we must convince the rest of our fellow citizens that this is the way forward too.