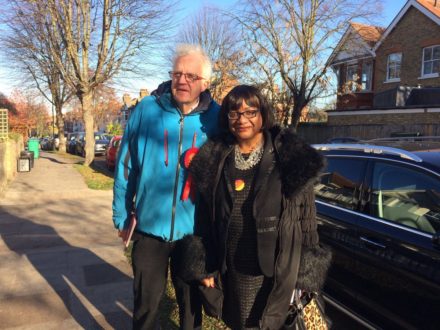 This is the full text of the speech given by Christian Wolmar at the final hustings for the Richmond Park by-election last night.

I am Christian Wolmar, writer and broadcaster, and seeking to be your Labour MP.

Some people have asked why am I standing given that Labour has never had an MP in Richmond.

There’s two good reasons why I am here.

First, I am here to present the progressive alternative, the Labour party which has always stood for a better, safer, and more equal society.

We are only here because Zac failed – he failed to persuade his own party not to choose Heathrow as the site of the new runway. Indeed we all know that the only reason Heathrow was chosen over Gatwick was precisely because of Brexit – which Zac supported.

So the irony is this by-election has had to be called not because of Zac’s principled stand on Heathrow but because people like him campaigned for Brexit.

If  it’s an environmentalist you’re looking for, then I’m your man, not Zac. I have campaigned on environmental issues my whole working life.

I was an anti-roads protester in the Seventies;
I’m on the board of the London Cycling Campaign;
I campaigned for the pedestrianisation of Oxford Street for a decade before Sadiq took up my idea, which is now going to be put into practice precisely because I made it part of my Labour mayoral campaign.

All you have done Zac is oppose car parking charges in Richmond Park!

Zac, you present yourself as a nice guy but nice guys don’t, as you did, vote to cut people’s housing benefit because they happen to have a spare bedroom – I just wonder, Zac, how many spare bedrooms do you have?

Nor do nice guys vote consistently for cuts in welfare benefits to disabled people – indeed clearly the local Richmond charity for the disabled realised this as they sacked you as their patron.

Nor do nice guys run a campaign like the one you ran against Sadiq.

You said Sadiq had ‘legitimised those with extremist views’ – and you have never apologized for this disgraceful slur. Do you still believe that Sadiq is a danger to London?

You say, too, that you will be better off as an Independent in Parliament – but how come you have been a Tory all these years? And you refuse to say that you might stand as a Tory in future elections – because, of course, otherwise the party will stand against you.

So this has all been about faking a principled stand whilst keeping your career intact – just like your Brexit friends in govt, you want to have your cake and eat it.

And Sarah the Lib Dems are not a coherent alternative. The memory of the coalition is all about cuts, austerity, welfare reductions and increases in student fees that your party supported.

So would we expect the Lib Dems to stress their distinctive voice, their separation from the Tories? No chance. You promise a ‘fairer society, and a stronger economy’ but in government you delivered austerity and welfare cuts.

Indeed, Sarah, you were singing the praises of the Tories only a couple of weeks before this election.

You praised Theresa May for her ‘for coolness, steeliness, common sense, hard work, [and] competence’ but only had criticism for both Owen Smith and Jeremy Corbyn. And you seriously expected Labour to stand down in your favour?

You later deleted that blog but the Evening Standard dug it up and focussed on your views on Brexit – you had written that we just had to accept Brexit and not have a second refendum , but now your leaflets say that you will vote against Article 50 unless there is the promise of a second referendum.

I can tell you this – there will be no flim-flammery on Brexit from me. I will vote against a single line Article 50 because I know that Brexit is bad for Britain. We know that from the dodgy Nissan deal, the 30,000 extra civil servants needed to bring it about and the scribbled incoherent notes about leaving the Common Market being discussed in No 10.

The Labour party offers a different vision of society. We are the party of the NHS, of comprehensive rather than grammar schools, of championing the less well-off, of protecting workers’ rights, of building social housing – and so much more.

That alternative has resonated well on the doorstep. I have met countless wonderful Labour and potential Labour voters in this constituency.

I studied economics and I know that the present policies, cutting back on vital services and imposing austerity on millions of people is wrongheaded.

We need to support those who are struggling to make ends meet rather than squeezing them further.

Here’s what I can’t understand – we are a far richer society than we were 30 years ago; yet it is said we cannot afford decent public services – that is not true.

It is only because the few are getting such a high proportion of the extra wealth that we have to close libraries, hospital wards – even possibly Kingston Hospital itself – cut mental health services and stop building social housing.

None of these cuts are necessary.

People voted for Brexit and Trump and right wing European parties because they feel that governments and politicians no longer work for them, that the system is weighted against them.

We need to show that we offer a genuine, progressive alternative to give them hope of a better future

Unlike the Lib Dems, the Labour party is unequivocal in rejecting the austerity programme – because it simply isn’t working.
The housing situation in London is getting worse and worse: we need to stop billionaires who need somewhere to park their money from paying millions for homes they will never live in, and help people at the other end of the scale.

The Tories talk endlessly about helping the JAMs but this is just post-truth politics.

We need to invest in the future
We need to restrict right-to-buy and invest in council-house building.
We need rent controls to protect young people from extortionate landlords.
We need to halt the creeping privatisation of the NHS.
We need to put more money into schools.
Indeed they are making their lives worse. These are the things the Labour Party stands for – And that’s why I am seeking your votes on Thursday