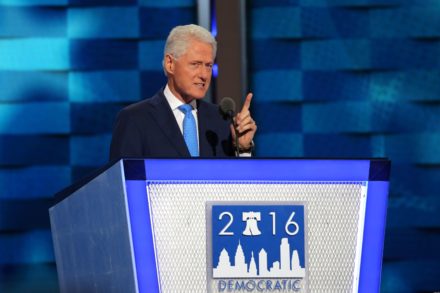 Labour “practically got a guy off the street” when it elected Jeremy Corbyn as leader, according to Bill Clinton. The former US President also said that the party had gone for “the maddest person in the room” in its leadership contest during a private speech, made public by Wikileaks.

The comments came to light as America goes to the polls to choose its next president today, with Hillary Clinton widely considered the favourite.

In the leaked speech transcript, which is marked “for internal use only” and was made a year ago, Bill Clinton analyses why Labour chose Ed Miliband over his brother David, and then voted for Corbyn after the general election defeat five years later.

The two-time presidential winner, who had a close relationship with Tony Blair in the 1990s, said that Labour members were “mad at” David Miliband because of his ties to the Blair government and support for the Iraq War.

And he says that people rallied behind Corbyn because they felt “they’ve been shafted” and so opted for “the maddest person in the room” – a decision he describes as “understandable and predictable”. In this context, it appears Clinton is suggesting that Corbyn was elected because he was the candidate angriest about economic inequality, comparing his rise to that of Syriza in Greece.

However, Clinton does not appear to think that Corbyn was a wise choice as leader. He says that the argument Labour lost last year because it “hadn’t moved far left enough” is an “interesting conclusion”, and describes Corbyn as “practically… a guy off the street”.

“The British Labour Party disposed of its most (inaudible) leader, David Miliband, because they were mad at him for being part of Tony Blair’s government in the Iraq War,” Bill Clinton said at a Hillary for America fundraiser in Maryland, in October last year.

“And they moved to the left and put his brother in as leader because the British labor [sic] movement wanted it. When David Cameron thumped him in the election, they reached the interesting conclusion that they lost because they hadn’t moved far left enough, and so they went out and practically got a guy off the street to be the leader of the British Labor [sic] Party, who I saw in the press today said that he was really a British citizen and had real British (inaudible). (Laughter.)

“But what that is reflective of – the same thing happened in the Greek election – when people feel they’ve been shafted and they don’t expect anything to happen anyway, they just want the maddest person in the room to represent them.

“And that is perfectly psychologically understandable and predictable. Most people in America haven’t had a raise in 15 years. Eighty-six percent of the American people, adjusted for inflation, have an income today lower than it was the day before the crash. The median income of American families, adjusted for inflation, is lower than it was the day I left office.“

This leak is the latest to hit the Clinton campaign, with many of campaign chair John Podesta’s emails released by the controversial Wikileaks organisation. Wikileaks’ chief, Julian Assange, remains in the Ecuadorian embassy in London, as he attempts to avoid arrest over allegations of rape made against him in Sweden, and he has come under criticism during this US election for the one-sided nature of his leaks, which have hit Clinton’s campaign more than Donald Trump’s.