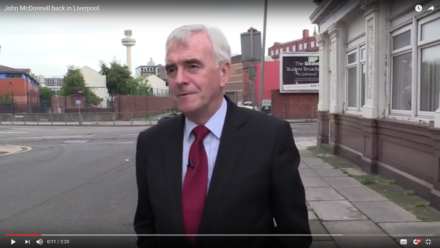 John McDonnell has used a personal video message to warn that Labour’s core achievements – such as social housing and the creation of the NHS – which helped his own family are under threat once again from the Tories.

The shadow chancellor published the short film, which shows him returning to his childhood home in a Liverpool inner city street, then among “some of the worst slum conditions in this country”, to highlight how he and his family had been helped by the reforms introduced by Labour governments under Clement Attlee, Harold Wilson and Jim Callaghan.

McDonnell says the landmark changes delivered by Labour are “under attack” by the Tories and says Jeremy Corbyn’s agenda can help rebuild so “no community is ever left behind again”.

He made the film to mark North West Labour conference, which is being held in Blackpool and runs on Saturday and Sunday.

He describes his childhood in bomb-damaged Liverpool and the time spent there before his family moved south as his docker father looked for work.

“All those politics that Jeremy Corbyn has put forward about building more homes, ending privatisation of the NHS, investing in education, investing in our infrastructure so it creates jobs-  all of those policies can combine to restoring people’s optimism in their future and the future of this country. We need a Labour government that will rebuild our country and transform our country so nobody and no community is ever left behind again.”

McDonnell will be among the speakers in Blackpool alongside shadow education secretary Angela Rayner, shadow housing secretary John Healey and elections and campaigns co-ordinator Jon Trickett.