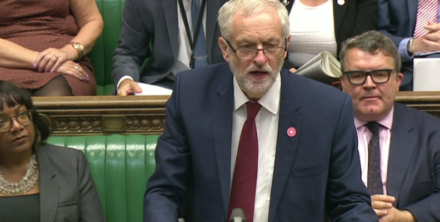 Jeremy Corbyn today condemned anti-Semitism as “repugnant” as Theresa May signalled that a series of public bodies would adopt an international definition of anti-Jewish prejudice in a bid to drive out bigotry.

Corbyn backed the definition, which sets out anti-Semitism as a “certain perception of Jews, which may be expressed as hatred”, and was drawn up by the International Holocaust Remembrance Alliance (IHRA) earlier this year.

It comes just days after a far-right extremist was jailed for two years for harassing Labour MP Luciana Berger with a series of anti-Semitic rants online.

Corbyn and May have both embraced the new definition while a recent report, by charity the Community Security Trust, highlighted a worrying rise in anti-Semitic incidents in the first half of this year.

The IHRA definition says: “Antisemitism is a certain perception of Jews, which may be expressed as hatred toward Jews. Rhetorical and physical manifestations of antisemitism are directed toward Jewish or non-Jewish individuals and/or their property, toward Jewish community institutions and religious facilities.”

Corbyn, who some Labour members have criticised for not doing more to stamp out anti-Semitism in the party, said any prejudive towards Jews must not be tolerated.

“Jeremy Corbyn and the Labour Party share the view that language or behaviour that displays hatred towards Jews is anti-Semitism, and is as repugnant and unacceptable as any other form of racism,” a spokesperson said.

“Jeremy has consistently spoken out against all forms of anti Semitism and condemned all anti-Semitic abuse, and set up the Charkrabarti inquiry into anti-Semitism and other forms of racism.

“Its recommendations have already led to far-reaching changes to the rules and practice of the Labour Party. He has also taken decisive disciplinary action over allegations of anti Semitism, including a series of suspensions and exclusions from membership.”

Shami Chakrabarti’s report, drawn up in response to several instances of anti-Semitism in the party, said Labour was not “over-run” with the prejudice but set out a series of recommendations on how to tackle problems.

The recommendations included avoided using Hitler, Nazi and Holocaust comparisons, particularly in relation to the Israel-Palestine conflict, increasing the racial diversity of party staff, and better dissemination of the party’s rule book.

Chakrabarti’s report was criticised when she accepted a Labour seat in the House of Lords. She later denied any discussion of a peerage took place before she carried out the inquiry.