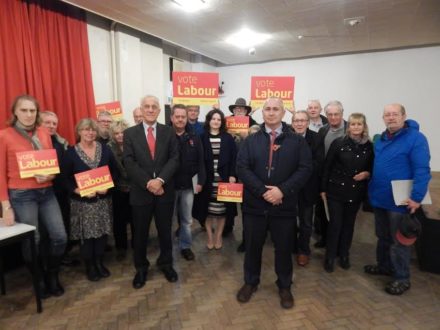 Tory candidate Caroline Johnson held the Sleaford and North Hykeham constituency with 17,570 votes ahead of UKIP and the Lib Dems.

Jim Clarke won 3,363 votes in what has been a safe Tory seat but which came up for grabs after Stephen Phillips, who was only re-elected last year, quit because of “irreconcilable policy differences” with Theresa May.

Clarke, a dustman and GMB activist, won 10.2 per cent of the vote, down seven percentage points from the general election, when Labour came in second place.

UKIP’s share of the vote also fell despite visits from Paul Nuttall, the new leader, and Nigel Farage, as well as a host of activists.

Johnson, a paediatrician, recorded a majority of 13,144, down significantly from last year after six months of Tory chaos over Brexit.

Vernon Coaker, the former shadow Cabinet minister, said Labour’s result was not that for which the party had hoped.

“But we’re proud of what we did. We kept our deposit which some people said we were going to lose.”

Labour’s disappointing result comes just a week after it trailed in behind the Lib Dems and the Tories in the Richmond Park by-election. Christian Wolmar lost his deposit despite a strong local campaign focused on transport, the environment and Heathrow.