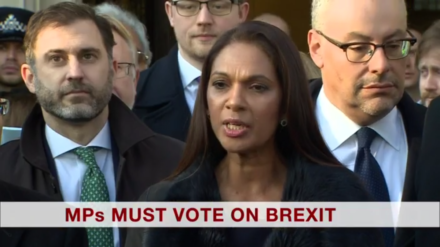 Figures from across the labour movement have given their reaction to Theresa May’s defeat in the Supreme Court over an earlier ruling that MPs must be given a vote on triggering article 50.

Frances O’Grady, general secretary of the TUC: The prime minister has only given a list of Brexit priorities, and we are still waiting for the details of her plans.

Before voting to trigger article 50, MPs must demand a clear plan from Theresa May on how she will protect working people from paying the price for Brexit, and make sure their workplace rights do not fall behind those in the EU.

Parliament also needs to see detailed proposals for how the UK’s devolved governments will be engaged in the negotiations, and a full plan for how we can keep our common travel area with Ireland.

Len McCluskey, general secretary of Unite: In what is the most profound issue facing our country since the second world war, it is correct that our elected representatives will be able to scrutinise the government’s Brexit plans. The Supreme Court judges made the right decision for the people of this country.

There has been scant detail in the prime minister’s statements to date. What she has said on workers’ rights has been ambiguous and her declaration that the country would not seek access to the single market is shocking.

It is now for our MPs to hold the government to account. They must defend workers’ rights, both now and from future Conservative party threats. Their job now is to ensure that government pursues the best deal possible for working people and our communities, not one to please the hard right of the Tory party.

David Lammy, MP for Tottenham and former minister: It was absolutely absurd for an unelected prime minister and her cabinet to think that they had the power to trigger article 50 without even consulting our sovereign parliament.

The government alone cannot interpret what the referendum result means and where we go from here – they have to bring forward legislation that will be scrutinised and debated by parliament. It is individual members of parliament who are democratically accountable to the electorate at the ballot box and the Government must not try and steamroll legislation through parliament. What happens next will define the future of our country for generations, and there is too much at stake.

Pat McFadden, MP for Wolverhampton South East and supporter of the Open Britain campaign: The government has now been defeated twice in the courts in its attempt to deny parliament a say over invoking article 50. The Supreme Court judgement must now be implemented.

The government’s bill should be capable of proper debate and amendment. Ministers’ approach should be one that has nothing to fear from debate, rather than constantly trying to shut it down and portraying anyone who raises questions about their approach as trying to deny the will of the people. It is essential that Parliament is given a real voice and able to shape the negotiation outcomes, including with a meaningful vote at the end of the process.

And parliament’s legitimate role is not just about the triggering of article 50 – it is also about the content of the deal the government is trying to achieve. The prime minister set out her objectives last week and parliament has a critical role in scrutinising and debating the effect of her aims on the lives of our constituents, on their rights and freedoms and on their prosperity and opportunities.

John Mann, MP for Bassetlaw: The Supreme Court has been very clear. The government must now publish the Brexit bill and I expect it to receive overwhelming support in parliament. A straightforward Brexit bill will sail through parliament and it is time for the government to get on with this.”

I predict virtually every Midlands MP will vote for triggering article 50 and it will be voted on by next week, passing with a huge majority. May is sometimes too clever for her own good. We voted to return powers to Britain so it is time parliament and government got on with it.

Kate Hoey, MP for Vauxhall and Brexit campaigner: If Labour MPs are seen to be frustrating the will of the people by opposing article 50 then they will lose their seats. It is time for the Labour Party to support the government by voting for article 50 and working together to ensure the United Kingdom enjoys the global opportunities Brexit provides.

Kezia Dugdale, leader of Scottish Labour: It’s clear now that this is a decision for the UK parliament. Labour in the UK parliament will seek to amend the article 50 Bill to prevent the Conservatives using Brexit to turn Britain into a bargain basement tax haven off the coast of Europe.

We will continue to work with the Scottish Government to get the best deal for Scotland within the UK. But both the SNP and the Conservatives are casting about for an expedient political position rather than working in the national interest. Unity cannot be achieved by a politics that sees one half of the country constantly facing off against the other.

We are divided enough already. That’s why there will be no support from Scottish Labour for any SNP plan for a second independence referendum. Only Labour is standing up for what the majority of Scots want – a strong Scottish Parliament within the UK and close ties with Europe.

Dan Jarvis, MP for Barnsley Central on Twitter: Court ruling means MPs will vote on article 50. I will respect #Euref result & fight for best deal on jobs, the economy & rights at work.

This page will be updated throughout today.