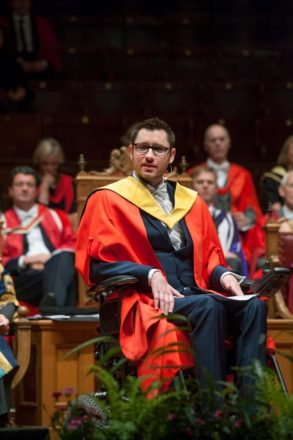 Gordon Aikman was propelled into the media when he was tragically diagnosed with motor neurone disease at the age of 29 during the Scottish independence referendum. Gordon served as the No campaign’s director of research when his hands started to feel numb and he – reluctantly – went to the doctors. What started as a “struggle with tying shoelaces and buttoning shirts” led to some life changing decisions.

“Quitting [Better Together] was never an option” he told the Scotsman in June 2014. He did, however, have to cut of out commute from Edinburgh to Glasgow and work remotely. He powered through and was part of the team that held the United Kingdom together. In the same piece he warned that he would most likely be in a wheelchair by Christmas and he warned his friends of the steep decline that could follow. He defied the timing suggested by his doctors time and again. Sadly, on Wednesday Gordon lost his battle with MND and leaves behind a massive hole in so many people’s lives.

Gordon was a wonderful person. He was handsome – I still remember the first time I met him and how striking I found him – and incredibly kind guy. As a sabbatical officer he had a poise that few of us exhibited. He worked for Scottish Labour through the stressful 2011 campaign, among others, and rarely let it be known if he was under pressure in the way everyone else so clearly was. Had things been different it was clear to anyone who worked with him that a life of public service was calling and Labour would be lucky to have such a talent on its benches.

I interviewed Gordon for Progress magazine in March 2015. Talking about the fate of Scottish Labour, he said it would be “sad” if UK Labour was “broken up” and the party north of the border went its separate way. But in a moment of great elegance he remarked that “we should never be fearful of change”. He had more to fear than most but was approaching life with courage. “I think we could all learn from Philip Gould about making the most of every day”, he said – knowing his audience so well – of the former New Labour pollster who wrote about his own battle with cancer. “Life is finite.” “With the progressive nature of MND, I know that today is my healthiest day; I am only going to get worse.”

A great supporter of the NHS, Gordon was appalled by some of what he found on being diagnosed. He “fired an email off to a bunch of MSPs” and used his time to give voice to MND patients. He raised £0.5m for MND Scotland through the ice-bucket challenge and much besides. But this was the tip of the iceberg. He put his formidable campaign skills to work. In a previous life as an opposition researcher, first minister Alex Salmond publicly bemoaned the fact Gordon was responsible for 14 per cent of all freedom of information requests to the Scottish government – it was this ability to move the Holyrood parliament that would come in useful.

He had seven policy demands that he was campaigning for. Four – pay MND nurses from the public purse, double the number of MND nurses, guarantee MND patients a voice and pay carers a living wage – were delivered in full. A further two – the fast-tracking of benefits for terminally ill patients and outlawing care charges – he was actively “monitoring [the] problem”. His last – doubling MND research funding – has shamefully seen no action from the British government.

He told me the campaign “really restored my faith in politics. It’s been so successful but partly [the success lies] in the speed at which it all happened. Politics and policymaking tend not to be fast.” Time was not on his side but Nicola Sturgeon – having just become first minister – agreed to meet him. He secured real answers to his questions and results from his demands. He knew little, if any, of these changes would help him in his battle with MND but in many ways that was not the point. He wanted to leave behind something bigger than himself. There was pride but little arrogance; he wanted a legacy – not to be remembered by but for others to benefit from. Those who were lucky enough to know him, even a bit, continue to be inspired by his example.

His personal fear was losing his voice. “I don’t want anything to go unsaid.” He cherished every day and welcomed each new year following his diagnoses with joy and some surprise. “O hi 2017, I didn’t expect to see you. Thanks for all the love and support that’s helped get me here”, he tweeted just 33 days ago.

It was his family and close friends, and most importantly his lovely husband Joe, who he cherished so much. I know he would give back the visits to the White House and beautiful holidays for one more day with them all. I wept as he told me, “I am dying, but I am lucky in many ways, l’ve found love and for that I am hugely grateful.”

He leaves behind his husband Joe and his mum, sister and nephew.