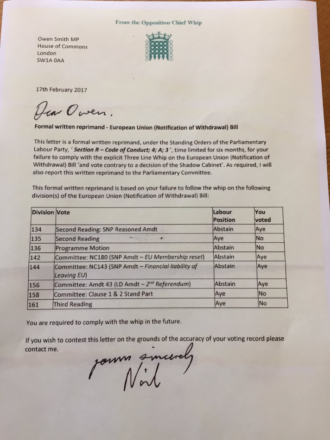 Labour MPs who rebelled against Jeremy Corbyn over Brexit have disclosed details of the formal warnings handed to them by the leader’s veteran enforcer.

Smith, MP for Pontypridd, posted a copy of the “formal written reprimand” on Twitter after he was one of 52 Labour MPs to break a three-line whip on voting for article 50.

It is thought that Brown has written to all of the Brexit rebels as the Commons returns from half-term recess today.

“Just received my first ever ‘reprimand’ letter for breaking the whip (on Article 50). Thinking of framing it…”, Smith wrote on Twitter today.

David Lammy, MP for Tottenham, posted his letter and vowed to repeat his rebellion if given the choice.

“Just received a formal reprimand from the Chief Whip. Thanks, but this was a matter of conscience. I would do it again without hesitation,” he wrote.

Gapes, Ilford South MP, did not post the letter but wrote on Twitter: “Just got my first ever Formal Written Reprimand letter from the Chief Whip. It’s now in a frame. But long way to go to match Jeremy.”

The final comment is a reference to Corbyn’s long history of Commons rebellions before he became leader. As a backbencher the veteran socialist broke the Labour whip 400 or 500 times, depending on how it is measured.