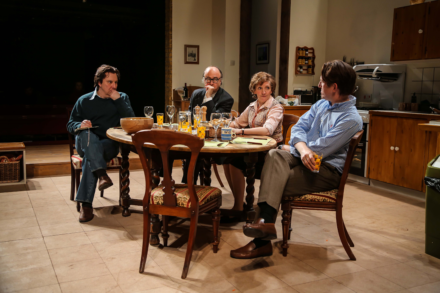 To many in Labour they are one of the main reasons why the party plunged to two election defeats in the 1980s, paving the way for a decade of Thatcherism.

To some in the centre, however, the Gang of Four were principled politicians who foresaw voters’ rejection of old-fashioned socialism when they set up a new party in 1981.

Whatever your view it is clear the four defectors changed the face of British politics. Now their place in history has been dramatised in a new play and the three surviving members of the group have given a rare joint interview to mark the occasion.

David Owen, Shirley Williams and Bill Rodgers gave their verdict on Jeremy Corbyn, Labour and much else when they came together as the production, Limehouse (above, at the Donmar Warehouse), opened for previews this week. Their former colleague, Roy Jenkins, died in 2003.

Williams said she believes Corbyn does not want to be prime minister while Rodgers said he thinks the Labour leader is a “very dangerous man on the far left”.

Their intervention, in a programme for BBC 5Live, will prompt controversy given what some view as the immense damage they did to the left more than 30 years ago.

In the general election of 1983, Margaret Thatcher cruised to a second victory with 42.4 per cent of the vote and 397 seats. Labour, under Michael Foot, won just 27.6 per cent and 209 seats under what the late Sir Gerald Kaufman described as the “longest suicide note in history”. Yet the tie-up between the gang of four’s SDP and the Liberals took 25.4 per cent of the vote. Although this translated into just 23 seats in the Commons, the combined support for Labour and the Alliance, as it was known, was in a huge majority of 53 per cent.

Today, with Labour in the doldrums in the opinion polls, some on the left have considered forming a new party. While many have suggested this is something contemplated by Tony Blair – particularly after his call for a new “movement” to “rise up” against a hard Brexit – the former prime minister has said he will “always be Labour”.

Denis Healey memorably described the split by the Gang of Four as a “disaster” and when Williams, now a peer, was asked if Labour MPs should break away to form a new party, she said: “I think there’ll be a battle. I think a really major battle in the Labour Party is inescapable”.

She repeated the claim by some Corbynsceptics that the veteran socialist does not want to be prime minister when she said: “He is a decent man… but I don’t think he actually wants the responsibility at all.”

Corbyn has won two leadership elections by a landslide and has pledged to stay on to fight Theresa May in 2020.

Owen, who is also a member of the House of Lords, rejected suggestions that he would advise Labour MPs to break away to form a new group.

He also struck a critical view of Labour’s leader, saying: “Jeremy Corbyn is a decent person and I think he will stand down before the next election – and I think Labour will choose somebody who is more acceptable to the electorate”.

Allies of Corbyn have denied he has any private plan to retire before the end of the decade and repeatedly said he wants to enter Downing Street to transform Britain.

The interview by the three politicians will divide opinion. Given their failure to get anywhere near power, in part because of the inequalities of the voting system, many on the left are still hostile to the Gang of Four. Those who are Labour members will point to the Alliance’s evolution into the modern Lib Dems and the right-wing programme of spending cuts delivered by Nick Clegg and his colleagues between 2010 and 2015. Owen and the rest of his group cannot be blamed for that, of course but, whatever their intentions at the start of the 1980s, they certainly played a key part in ensuring the decade was dominated by Thatcherism rather than socialism.