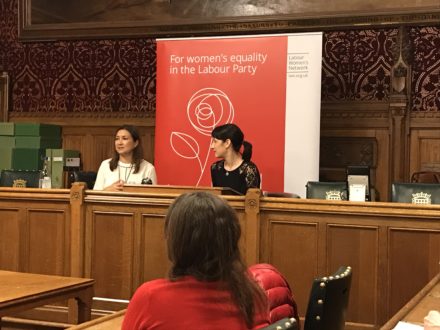 We need to tell the stories of women in our party, and their importance to the Labour movement, Rachel Reeves urged at a Labour women’s network event in parliament last night.

Reeves, the former shadow work and pensions secretary, became only the second female MP to represent Leeds when she was elected in 2010, and as she took to the stage at the count to give her victory speech, she felt compelled to not only pay tribute to her predecessor, John Battle, but also to the woman who was the first – Alice Bacon.

“I was also aware that I didn’t know much about Alice – and that I could learn from her”.

This was why Reeves felt compelled to write her book on Bacon, Alice in Westminster, which covers her early life as well as her numerous achievements through her time in politics.

Reeves questioned why it is that figures such as Bacon are almost forgotten, and not spoken of in the same breath as Anthony Crosland and Roy Jenkins – despite being similarly influential. Bacon was a minister in the home office when the three big reforms – legalising abortion, homosexuality and ending the death penalty – were steered through parliament.

This was no mean feat, as the mood in the party, House and country at large was not necessarily in favour of the bold shifts. Bacon was a key player in navigating the legislation through the Commons, and she had to manage the opposition to the bills carefully. Many were concerned that the laws could threaten Labour’s working class support, and for some there was a “hierarchy of importance”, where anything that wasn’t directly related to socialist policy making should not be prioritised.

Indeed, there was outright opposition to them from some quarters.

But, nevertheless, she, and Labour, persisted – and transformed lives.

As a longtime member of Labour’s national executive committee, Bacon was there as a result of being heavily involved in the women’s section. However, when elected, she asked to be judged as “a socialist not a feminist” Reeves said.

This speaks to a bigger issue, of the double standards and unfair ways women are treated in politics and public life. Whilst it was of course worse in Alice’s day, that’s not to say that it is gone now.

Ayesha Hazarika, Harriet Harman’s former adviser, chaired the event, and she summed up the situation saying “there’s a penalty either way” on motherhood.

Bacon was unmarried and childless, and was described as “homely, simple and plump” by the Evening Standard in her day. It is rather hard to imagine one of her male peers being described thus.

Reeves recalled the treatment she got in the run up to the 2015 general election, when as a front bench shadow minister, she toured the country campaigning – all whilst heavily pregnant. She had pledged to continue after giving birth, sparking some confusion in some quarters who were amazed by the notion that she would be able to.

It did not seem that David Cameron was subjected to the same scrutiny, as a parent of young children leading a government, never mind simply being a potential government minister, Reeves mused.

Similarly, Nicola Sturgeon and Theresa May have been criticised for being childless. It would seem that, as a woman in politics, you can’t win.

Reeves wants it to be normal for women to be ambitious in politics, and for her this is part of the reason why a woman has never led the Labour party. She says she would one day love to be chancellor, a job she feels well qualified for, and Jess Phillips, who attended the event, said she would like to be home secretary.

Nicknamed by Denis Healey as the “terror of the Trotskyites”, Bacon was also critically important in the battles within the Labour party, and was regarded as being on the right of the party.

Bacon “in the 1950s spoke more about comprehensives than anyone else in the House”, Reeves highlighted, with her experience as a teacher at a postwar secondary modern – where 75 per cent of the pupils were malnourished – serving as fuel in her push to rid the country of poverty. The grammar school system was to her unacceptable, and the substandard education it left, predominantly for working class children, was something Bacon desperately wanted to change.

And change it she did, working in the department of education as the pioneering reforms were introduced in the late 1960s.

This discussion happened at a Labour Women’s Network event, you can visit their website here.

Rachel Reeves’ book Alice in Westminster is out now.