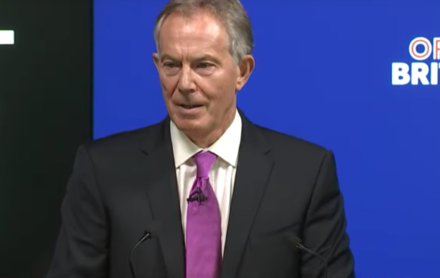 This is the full text of the statement published by Tony Blair on his Institute for Global Change website.

The Prime Minister has called the election for two reasons. Firstly, the state of the Labour leadership offers such an obvious target that it would be an extraordinary act of political self-denial to refuse to put the Opposition to the test.

And secondly, she understands now is the optimum time to win a mandate for Brexit Means Brexit aka Brexit At Any Cost. At present people believe that the predictions of pain following Brexit have turned out to be false; that the country has taken a decision and that therefore we should push ahead. The nation is by no means united – a substantial number is still utterly opposed. But the prevailing mood is: get on with it.

6/9 months from now, Brexit will look very different. What the PM will have come to know as she gets more and more detailed briefing about Brexit, is what those of us who are investigating further the negotiation which Britain is about to undertake, have been discovering: this negotiation is going to be hideously difficult not just in technical terms but politically.

She needs a Parliament that will support whatever deal she presents or indeed the absence of a deal. Right now, there are many MPs, even on her own side, who will assess the deal on its merits. And if it seems to them not to meet the Government’s own test of delivering “exactly the same benefits” as membership of the Single Market and Customs Union, or we end up with no deal, then they may vote against it.

She needs to insulate herself against that possibility, by going for a Tory landslide with her new MPs ardent Brexiteers as many of them no doubt will be.

But the damage to the country will be huge if we end up with an unrestrained “Brexit At Any Cost” majority.

All of these choices are fraught with pain and to top it all, on the gain side of the equation, the more we learn about the immigrants from Europe the more it seems plain that actually we want/need most of them anyway.

Once this realisation dawns, the British people will be open to changing their mind. I am not saying they will change their mind; but a significant proportion of them will be open to it. This would be especially so if elections elsewhere in Europe start to produce Europe – wide calls for reform.

The purpose of calling the British election now is to close this possibility down.

As of now, we can speculate as I just have, but we don’t know what the options really are; we can’t assess the cost/benefit ratio; and we can’t make a fully informed choice. The 15 per cent devaluation of our currency – the real indicator of what the financial markets think will happen to the British economy i.e. we’re going to be poorer – has been dismissed fairly successfully. News of companies who say they will stay in Britain is heralded as proof it is all fine as if they wouldn’t be here if Brexit wasn’t happening. The expressions of concern from business are largely relegated to second order news.

I still believe there is a grave under-estimation of the threat to the Union both in Scotland and Northern Ireland; but people take comfort from the fact that the polls still show support for the Union. For now.

The combination of a dominant Government and the right wing media cartel is able to keep afloat the claim that Brexit works.

The moment that negotiation begins, the collision with reality will be severe. But it will be after the election.

This is the political dilemma we as a country face.

The country did vote for Brexit; but narrowly. And there are many, on both sides of the debate, who will want to know the terms of a deal before making up their minds finally.

Because of the – in my experience – unique circumstances of the politics of Britain today, the PM can call an election, get a landslide, and then claim a mandate for Brexit At Any Cost.

There has to be a way of ensuring that voters can put candidates for Parliament under sustained pressure to say whether they would vote against a deal which does not deliver the same benefits as we enjoy with the Single Market or against no deal if that transpires to be as damaging as many fear; and that they are prepared to hold the Government properly to account in the interests of the country.

This should cross Party lines.

The political situation the country faces is unprecedented and dangerous. We risk a Parliament which is lop-sided in its make-up; which has a big Tory majority – in part delivered not because of the intrinsic merits of Brexit or the Tories themselves but because of the state of Labour; where they will claim a mandate to take us wherever they will; when we desperately need representatives who will at least keep an open mind.

This requires the electorate in every constituency to know where the candidates stand; and the mobilisation of the thousands in each constituency to make it clear that for them this issue counts when it comes to their vote.

To be clear: I am not urging tactical voting or some anti Tory alliance; I am urging that, as part of this election campaign, we create the capacity for the people to know exactly what the choices are; and elect as many MPs as possible with an open mind on this issue who are prepared to vote according to the quality of the deal and the interests of the British people.

I have never known a political situation as perplexing as this; or as galvanising. But I am absolutely sure that there will be millions of British people who reflect on what this election means with acute anxiety; and wonder what can be done.

The first thing is to keep open the possibility, on the most important issue to face our country for over half a century, that we have Parliamentary representatives who will put the national interest before Party interest.