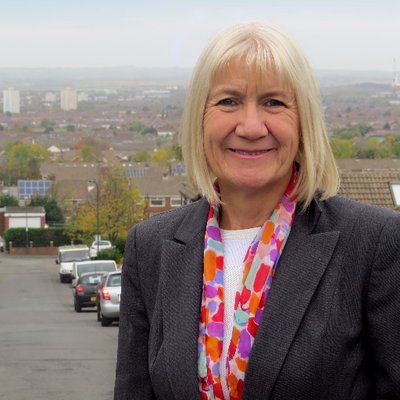 “My whole agenda is about jobs and job creation,” begins Sue Jeffrey, Labour’s candidate for the Tees Valley metro mayoralty.

Jeffrey is fighting to become mayor of a Brexit-backing area best known for the steel works, heavy industry and a legacy of deindustrialistion under the Tories. She is one of only two women nominated by Labour for the newly created metro mayoral positions up for election this Thursday and she is relishing the opportunity to create a new chapter in the north east’s industrial history.

For her, the mayor’s ability to focus on industrial strategy and economic development is key, particularly as Britain comes to terms with life outside the EU.

“For an area like the Tees Valley, which relies on industry for jobs, if it starts looking like the whole industrial future is getting a bit flakey then that sets alarm bells ringing straight away.”

“Particularly hard on the heels of some of the closures that we’ve had, at SSI [steelworks] and places like that.”

“Jobs have been absolutely central to my manifesto, and linked with that is skills.” She went further, critiquing an education system which isn’t creating the skill set needed for young people locally.

“We need to refocus, reboot almost, our whole skills offer, so that we can ensure that young people are getting the skills that they need to be able to get the jobs we are hopefully going to create.”

The question is though, how is it that she’s going to create these new jobs?

“That’s obviously the difficult bit. I believe strongly, that there’s already some excellent ground work in place to ensure that we are going to attract new investors.”

“In the last year or so, we’ve already attracted £1bn of investment through building the new power station, we’re going to have a new mining arrangement – with significant investment going forward. We’ve also got a real track record of innovation locally, and what that means is, we’ve got a lot of people, with lots of good ideas, who just need to be given that extra push to turn them into something that’ going to create the jobs of the future.”

Jeffrey is currently the leader of Redcar and Cleveland council, and the investment in the region recently is something in which she has played a part. Her pledges on job creation are clearly more than a soundbite and she has a track record of leadership in the area.

“One of the things that’s significant that I think the mayor is going to be able to do, as much as anything else, is to take a few more risks. I’m going to encourage a culture of risk taking going forward, to enable us to maximise on the innovation that we do have locally,” she says.

“In practical terms, the South Tees steel making site, which is where the SSI [steelworks] jobs were lost, we’re going to have powers to establish what’s called a mayoral development corporation there, which means we’re going to be able to create a package of incentives around any offers we make to industry to locate and start their businesses there.”

“And associated with that of course, is the fact that government still needs to invest in that site, to ensure that there are still steel making jobs.”

As mayor, she will be specifically focussed on driving plans forward for the region, she promises.

“The soft power of mayors is often talked about as a crucial issue, and I think in terms of getting delivery of some of these deals for jobs, that soft power is going to be really important.”

As well as jobs, Brexit is set to dominate the British political scene for the next few years.

“As a metro mayor, we would have advantages over other areas in relation to Brexit negotiations. First of all, because I can speak on behalf of a much larger area, an area with huge industrial history and capacity for the future – so that makes it attractive in itself.

“But also, because the regions have been promised a say in the whole Brexit negotiation process.”

“That gives us a seat at the table that we perviously wouldn’t have had – and indeed that others won’t have.”

“Aside from what the government might be doing nationally, its about the relationships that I as mayor can forge myself – we have business from right across Europe here in the Tees Valley. I’m having those conversations and discussions with them now, and that has to put us in an advantageous position.”

“Devolution, to some extent, pinches some of the language of Brexit, its about taking powers back from London.”

“I voted Remain, of course I did, but that’s irrelevant now. What’s important is that we actually make the most of the deal for the purposes of the Tees Valley.”

“I’m not prepared to take a passive role, sitting back role – it’s got to be a proactive, standing up for ourselves, speaking for ourselves role.”

How is the general election going to affect the local votes this Thursday?

“It’s raised awareness, and we might see a higher turnout than we otherwise might have done, and in theory that should help me.”

She’s frank about Labour’s polling woes, and how they might have an impact on her, saying: “We’re trying to win these votes in the context of a very difficult national position for Labour.”

She is though – despite Labour lagging behind on voting intention nationally – still odds on to beat her Tory rival this Thursday.

“We cannot be complacent,” she adds.

Jeffrey was one of only two women selected for Labour’s candidacy for metro mayoral positions – alongside Lesley Mansell for the West of England. She was clear that she absolutely shared my disappointment.

“Women at senior levels in local government tend not to do, and I could be proved entirely wrong, this is just me guessing this, tend not to do the economy, regeneration, transport those sorts of policy areas.”

“They tend to be much more likely to be found in housing, or social care, or children’s service – I could be completely wrong there, but that’s the experience of my authority.”

“I’m leader of Redcar and Cleveland council, and it was assumed that one of the leaders would do the job, and I’m the only woman leader, and I got the job. That was because I was chairing the combined authority when the devolution deal was being negotiated, so it was sensible for me to carry on, and I’ve got a professional background in the whole devolution agenda.”

Going forward though, this must change, she says, adding that the mayors themselves ought bear responsibility for this.

“Will that be the same next time round? Probably not – hopefully there will be more visibility.”

“It’s not good, and it will need to be addressed by the mayors. Both in terms of how they talk to the population that they’re representing, and the rest of the party.”

“It’s no good having a stack of middle aged white men doing the job.”

She’s not wrong there, and it is clear that Jeffrey has the knowledge and experience of working in the Tees Valley to be able to take it forward under its new devolution deal – hopefully as its first, Labour, metro mayor.