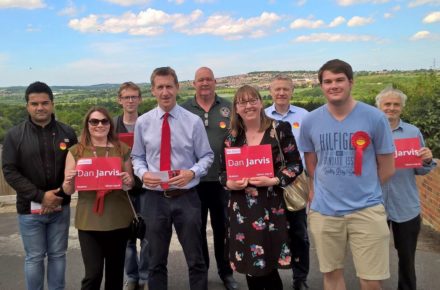 Labour’s Dan Jarvis has been the MP for Barnsley Central since 2011, when a by-election was triggered after the resignation of the previous MP over the an expenses scandal. The seat has been held by Labour ever since its creation in 1983, consistently with large majorities.

However, it is one of many areas in this part of the world that voted heavily for leave in the EU referendum, with 68 per cent of the town backing Brexit. Whilst it is a rare seat where every major party, including UKIP, is standing, and Jarvis had a 12,435 majority in 2015, he and his team are taking nothing for granted in these topsy-turvy political times.

Why are you standing and what have you got to offer the people of Barnsley Central in Britain’s next parliament?

“Very sadly my neighbour Michael Dugher is not standing, and some colleagues have decided that they want to pursue other things. I’m standing now for the same reason that I stood in the first place – I believe in the value of public service.

“I think I’m very lucky to have the opportunity to do something that I consider to be very worthwhile – it’s not the easy option in life, being a member of parliament is a massive life commitment, but it is also a wonderful privilege.

“I’m really proud of the progress that we’re making here in Barnsley, proud of my record of standing up for the town, and I want to keep doing that. So, for those reasons, I’m standing, and I hope people will look at me as someone who’s absolutely committed to standing up and representing here locally, and I think people will judge me on that record.”

“I always describe my politics through the prism of wanting to ensure a level playing field. I’m a member of parliament because I believe that every child should get the same life opportunities regardless of where they grow up. I think that’s in the very best traditions of our Labour movement – we are about equality of opportunity. I would describe my politics as about making sure that the kids that grow up in often quite deprived parts of my Yorkshire constituency get the same life opportunities as those who grow up in more affluent parts of Britain.

“That is my defining mission – that is what gets me out of bed, to build the kind of country that enables that same equality of opportunity. That is not the country that we live in at the moment, and my great frustration is that Britain is a great country, but it could be greater. I’m absolutely convinced that there is only one political vehicle to achieve that fairness and that equality – and that is the Labour Party. And that is our challenge today, tomorrow, and into the future – to demonstrate to the public that if you want a fairer country, most people do, we’re the only party that can deliver it for them.”

How has Brexit affected Barnsley?

“Too many people in towns like Barnsley felt like they had been left behind. Too many felt that globalisation had brought all sorts of benefits to the country, but not to them. We’re now not quite a year on from Brexit, and people expect the decision that was reached to be honoured. People don’t want to see me as their MP or the national Labour Party in anyway seeking to backtrack from the judgement that was reached. At the same time, none of my constituents voted to be poorer. None of them voted to have fewer rights that protect people in the workplace.

“What they want to see from me and from us collectively as a Labour Party is a vision for Britain beyond Brexit. I’ve actually spent quite a lot of time thinking, talking, writing about that – I wrote a paper a couple of months ago – about Britain beyond Brexit. I think that is a challenge for us as part of this election, to demonstrate as we leave the European Union that we can use that as a moment – of course, it’s much easier to do in government than ever it would be from opposition – to build the kind of country that all of us want to see.

“I think we have to be positive and upbeat about that. There’s quite a lot of people within the labour movement and within the country more generally who disagree with the decision and didn’t want to leave the EU. I speak as someone who voted for remain, but is bound by the decision, and now thinks that the most sensible way to proceed is in a kind of optimistic and upbeat fashion. To secure the best deal from the negotiations, and also to use this as a moment to build the fairer more decent society that we’re in the Labour party to achieve.”

“I think the manifesto is a really strong offer to the country, and it’s a much stronger offer than the Tory manifesto, what we’ve got to do is demonstrate that we understand the challenges that the country faces – and there are many, let’s be honest about it, this is a moment of profound challenge and uncertainty for the country as we leave the EU. We’ve got to demonstrate that our values, our ideas, our analysis of the challenges that we face, is the right one. I think that given the nature of the challenges, given the huge and widening levels of inequality that we have at the moment, given the huge pressures that we have on our public services, it is only a Labour government that can seek to reduce those inequalities and make sure that our public services are fit for purpose.

“And not just about the public sector, also the private – I think we’ve got a strong offer for business, to say to them that we recognise that they are wealth creators that create jobs and that we want to build the business environment that will allow them to compete and prosper as well.

“I’m pretty upbeat about the offer, I think the manifesto is full of big, bold ideas – that’s what manifestos should be about – and in the final days of the campaign we’ve got to get out there [the message] that voters should place their faith and trust in us. That we’re best placed to deliver on the big challenges the country faces.”

What have been the biggest issues on the doorstep?

“Most people have wanted to talk about their individual circumstances, either relating specifically to where they live, or specifically relating to their own lives. Whether its a lack of employment opportunities, or whether it is about skills, training, education. Whether it’s about older people and ensuring that we have a system of care that works for them and their families.

“That has been the focus of much of the conversations. You do find people who’ve read the manifesto but more often than not people will want to have a conversation with you about their locality and what’s happening locally.

Labour faces mixed poll ratings nationally so how do you deal with that in Barnsley?

“I completely ignore the polls, to be honest, we’ve got a plan for our campaign locally and it is untouched and unmoved by the polls.

“I think every candidate must run the strongest possible campaign and that’s what we’re doing. We’re leaving nothing to chance. We’ve all of us, involved in my campaign, have committed a huge amount. We’re working literally around the clock, seven days a week, to make sure we get the best possible result. Polls come and they go.

“It’s obviously encouraging that there’s been a narrowing of the polls, but we’re not doing anything differently as a result of that. We’re just getting on with talking to as many voters, getting every opportunity to communicate our local campaign messages and we will continue to do that until 10pm on polling day. At which point we’ll have a quick cup of tea, draw breath, and then go to the count.

“There is a national campaign that is playing out, and that is very important because people look at the debates and they read the newspapers, and they hear these national messages, but here in Barnsley Central its a very local campaign.”

“I think it’s always quite unseemly for politicians to start blaming the media, but I think that there is probably more that we could do to ensure that we use the mainstream media to deliver some of our strong messages. I think social media is an important tool to use in this campaign, but it is still not as significant as the major broadcast news.

“What the 10 o’clock news on the BBC is leading with is a big deal, and as a party we need to make sure that we’ve done everything we possibly can to shape those strategic news moments. I sometimes look at the mainstream media and think that maybe they’re not with us, or sometimes think that they don’t necessarily give us the fairest of hearings, but I don’t think now is the moment to have that debate.

“I don’t think you can blame it on the media, I think we have a responsibility to ensure that we engage with them and give them every opportunity to report the messages that we want them to report. Criticising or blaming the media is unhelpful throughout the campaign.”

What was thing you did to relax, that wasn’t campaigning, and what was it?

“I can hardly remember what that was. I guess it was running the London marathon, which some people wouldn’t necessarily describe as the most relaxing of experiences, and it was certainly pretty hard work. I’m really pleased that I did it, it was 3h 45m away from my phone which was a blessed relief.

“Talking to some of my Labour colleagues, all of us find elections pretty intense experiences, not just for us but for our families, who don’t see very much of us for a period of time. They’re obviously moments of great uncertainty, but they’re also moments of great opportunity as well.

“We need to seize that opportunity – this has been an incredible campaign, and who knows what’s going to happen in the final few day. There can be no relaxing, no doing other stuff – we need all hands to the pump for the final period as we turn out the Labour vote around the country.”