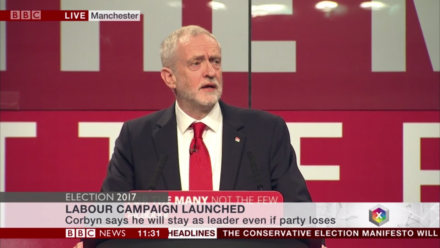 The team head back to the changing room at the end of a pretty brutal match. It’s been one hell of an effort. Heroic in many ways. They lost, but they played with such passion and energy and creativity that they won over many in the crowd. There was a sense that they had rediscovered their mojo, their old style of playing with flair, and lots of the fans loved it.

Written off before the game even started, their tactics and leadership were endlessly derided by the press and commentators, and even during the game they were subject to dirty play off the ball. The other team played ugly and even uglier as their own tactics unravelled on the pitch.

Yet the underdogs stuck to their game plan, and came out at the end of the game with new-found respect from the pundits and the crowd, and knowing that some of their key tactics really worked. There was real pride in the changing room.

But – just to clarify one more time – they lost.

The Labour Party and its supporters should take great heart from the performance we’ve just put in. We were being written-off. We should be immensely proud of the results and the huge efforts of our candidates and campaigners, as well as the new-found supporters who have rallied to our cause.

But now is the right time to take-stock. We need a hard-headed analysis of what went right, and what went wrong. After-all, we could be on the pitch again sooner rather than later, as the Weak and Unstable Tory-DUP “coalition of chaos” limps painfully into being.

Jeremy Corbyn and his policies enthused legions of progressive left-of-centre voters, some of whom had long tired of soundbite politics and policy by “triangulation” and focus-groups, and many of whom were of a new generation who were inspired by the old-style Labour gospel in a modern-setting. They were sick of endless austerity-politics and sick of Tory politicians telling them to stop whinging and to accept their lot in life.

We need to keep the fire of that enthusiasm alive, and continue to develop our policies to reflect this ambition for a fairer future for young and old. Properly costed policies which argue for redistribution and common ownership are not only popular, but are also part of our core Labour values. They can be truly radical – like the Tobin tax – as well, as long as they are also credible and inspiring.

Welsh Labour continues to establish itself as a powerful entity in its own right, and a redoubtable electoral force both in defending seats and winning seats against the odds. The substantial autonomy of the party on policy and leadership (whilst within a UK framework) gives us distinct advantages. Welsh Labour has earned the trust of many here, being seen as in tune with Welsh values and aspirations. Though we do have to keep earning that trust every day (see below for notes on “hubris”).

One other point: in Wales the mix of Carwyn Jones and Corbyn, and of UK and Welsh Labour was quite potent. In combination they managed to inspire or reassure many voters. This was the first British general election in which a Welsh Labour leader and Welsh Labour policies were so prominent in the campaign – witness the production of a separate Welsh Labour manifesto with Jones as figurehead of the campaign. Yet UK Labour policies and Corbyn himself were also crucial to inspiring many voters. Other parties may criticise the possible constitutional and electoral confusion from mixing Welsh and British policies and leadership, but you can bet they would be doing the same if they only could use the same chemistry.

Hubris so often leads to the undoing of political parties and politicians. When the astute electorate believes you are being complacent, or – even worse – arrogant, they will tear down your house of cards. Rightly so. Every politician should have a flashing neon screen-saver on their phones and I=pads yelling “Don’t trust your own hype! Don’t believe the polls! Show humility!”

The public saw through Theresa May’s opportunistic dash for an election, after she originally said that was the last thing the country needed as negotiations to leave the EU loomed. People laughed as the robotic “strong and stable” soundbites became the Tory dead-parrot. They were stunned by her cowardly avoidance of debates, and her dread of meeting real members of the public. And her policy chaos and U-turns, like the dementia tax, were treated with scorn.

Let’s be frank: we were lucky in our enemy at this election. We look forward to more Conservative leaders taking a stroll in the Welsh mountains, turning to their husband and saying “Wouldn’t a snap-election be a good idea, dear?”

From valiant losers to worthy victors

Across the Labour Party we have an ambitious and inspiring vision of a society which truly works for the many not the few, and radical policies which make that ambition achievable. We now have a solid platform on which to build for a victory in the next general election. That’s what progressive voters want, and frankly it’s what they and the UK deserve.

Yet we are still some way short of winning a UK majority, and it’s quite possible that the next “snap” election could hit us soon. It could even be called before the new parliamentary boundaries are in place (after which the electoral hill will become even steeper for Labour) so that should really focus our attention too.

Let’s acknowledge that the “one more push” mentality is simply not good enough. That way lies another valiant defeat, and we are better than that. So we must answer the difficult questions: Who are we failing to appeal to, and why, and how do we broaden that appeal? Where do we lack credibility? Where are we obviously weak and vulnerable to attack? Are we hard-headed enough to fix our weaknesses, and to broaden our appeal?

So in the immediate aftermath of the election, as soon as the “Vote Labour” placards are taken down and the campaign rooms cleared, we should as a party of members lock-ourselves away from the glare of armchair critics and political harpies and ask ourselves hard questions. Be honest with ourselves. Be constructive, but be brutally honest. How do we keep true to our values, and espouse those values in a bold way that excites and inspires the electorate as we have done recently, but also extend the appeal wider so that we take those Labour values and policies right into government to change the world.

Losing valiantly can feel good, but only in passing. Winning worthily feels better, and for longer.

Huw Irranca-Davies is the MP for Ogmore and a shadow energy minister.

View all articles by Huw Irranca-Davies