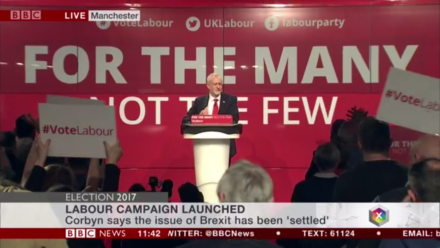 When on, April 18, Theresa May unexpectedly called a snap general election, most seasoned Labour activists and even, frankly, some Momentum members, simply buried their head in their hands.

Labour candidates, led by Jeremy Corbyn, were going to be lambs to the slaughter, and the ruthless May would exact punishment by securing a possible three-figure majority. By the early hours of June 9, however, it was clear that May had instead lost the Tories their majority and, accordingly, lost the election.

When May announced the snap election, my Dad’s instinctive reaction was that this was a massive gamble. She didn’t need to do this; she was already sitting on a (albeit small) Tory majority and she was about to begin the Brexit negotiations having triggered Article 50 back in March – which now feels like an eternity ago!  I thought this was an interesting reaction. After all, on paper, with the polls showing the now “hard-Brexiteer” Tories successfully cannibalising the UKIP vote, especially in the north of England and the midlands. She could storm various Labour heartlands, win a three-figure majority and her place in Tory folklore as the new darling Maggie would then be secure.

But Jeremy Corbyn had other plans.  He had quietly, or not so quietly, been fomenting and cementing support within the ranks of the 18-24 year old age group, and also with previous non-voters who were beginning to feel engaged and not ignored by the political “elite”. The geography was also to prove important – Corbyn was holding mass rallies up and down the country, in urban areas, but also in sub-urban areas and even in the countryside and in our neglected coastal towns. It seemed there was nowhere Corbyn wouldn’t go and speak if a rally or a market stall could be arranged. He appeared to be enjoying himself, freed from the shackles of the despatch box where he had been looking uncomfortable and dishevelled.

As soon as the election was called, Labour went into battle. In an organised manner, but also in what sometimes on the ground felt rather ad-hoc, activists left safe Labour seats and poured into marginals. And, to be fair, there were new activists (of all ages, but usually below 35) who had been attracted to politics for the first time by Corbyn’s leadership.

It sometimes felt a bit like a “cult of the personality” and that wasn’t working for everybody. Activists from the moderate wing and members of Momentum actually started working together and seemed to put factionalism to one side. It was a refreshing sight.

Then came the Labour manifesto, which was cleverly “leaked” before its official launch. It was surprisingly well-costed. Ninety-five per cent of the population would not be subject to a tax rise; the top five per cent would pay more and corporation tax would rise significantly but only to levels that were normal up until a few years ago.

It seemed to add up. Tuition fees would be abolished. Pensioners were guaranteed the triple-lock. It looked like a clear departure from austerity. The idea was to be honest with the electorate and to provide a clear alternative to the electorate. Ed Miliband’s manifesto, to be fair, had done so in 2015, but it had failed to resonate or cut through. The Corbyn strategy was to shout anti-austerity and a message of hope from the roof-tops, sometimes literally.

Following on from this, the Tories launched their manifesto. It contained a delicious own-goal and a gift to Labour – May’s new social care policy which would involve older people’s homes being taken as security for the cost of providing social care to that person should they develop dementia and/or other chronic diseases associated with old-age.

It was immediately labelled the “dementia tax”. The demographic most faithful to the Tories were shell-shocked. Tory MPs were furious that Nick Timothy and Fiona Hill, May’s top advisors, had been allowed to put this policy in the manifesto. George Osborne went on to call it “the worst ever Conservative manifesto”. Suddenly, the Tory vote was starting to look just a little softer than it had on April 18.

But the polls still had the Tories approximately 10 per cent points at least ahead of Labour. This would still translate into between a 70 and 100 seat majority for the Tories. Labour would be routed. All except YouGov and Survation – they had Labour running the Tories almost neck-and-neck as a share of the vote. The discrepancy was accounted for by YouGov and Survation keeping “raw” polling data, sure they have a model, but the model did not adjust for turnout of demographic groups.

All the other polling models were adjusting for very low turnout among the 18-25 age group. As it transpired, that age group voted in very large numbers, probably around the 70 per cent mark. Young voters, including students in university towns, led the “Corbyn surge”.

Yes, Labour did pile up votes in already “safe” Labour seats. But the party also took seats in England no one could have dreamt were in play: Canterbury, Stroud, Bedford, Chipping Barnet, Portsmouth South. Labour won back seats such as Warwick and Leamington. The home secretary, Amber Rudd, held on in Hastings after multiple recounts. Labour solidified its position in Wales. It came back from the dead in Scotland. A significant portion of the collapsing UKIP vote was unexpectedly breaking for Labour, when the working assumption had been that it would simply transfer to the Tories. Labour further outperformed expectations in London.

Aside from the young voters, the astonishing phenomenon of this election was Remainers in their droves voting for Labour. It was almost as if voters had taken up the gauntlet of May’s challenge –Remain voters decided to make this a referendum on May’s leadership and her unnecessary commitment to a hard Brexit and even latterly a “no deal”/”cliff-edge” Brexit.

In a sense, voters turned this into the second referendum they had been told they couldn’t have. They voted tactically, both locally and on a wider national level. This was hive-mind going viral. Pro-Remain groups like “Best for Britain” played their part, as did groups like Compass promoting the concept of a “progressive alliance”, which came to maturity on June 8. Remainers could see the Tory tactic of cleverly “cannibalising” the UKIP vote and they resolved to counter it by voting Labour.

Labour still failed to win the election, in other words Labour still lost its third general election in a row. But the Tories lost their majority, and for that Corbyn must be given credit.

Corbyn must also be applauded for having succeeded in politicising a new generation of people who many had written off as disengaged and apathetic. He showed them that politics does matter and they can make a difference at the ballot box. Finally, he has, against expectations, brought Labour closer to winning a majority next time by making gains in areas that Blair did well in, where Labour must win if the UK is ever to have a Labour government again. That must be the aim.  We can’t expect the stars to align for us, Labour must make its own luck.

View all articles by Cat Overton