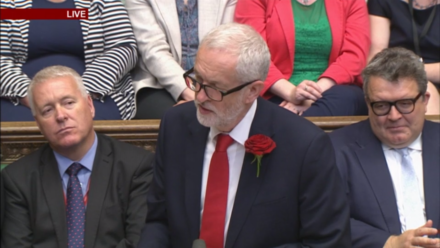 Jeremy Corbyn won a standing ovation from his MPs today before he taunted Theresa May over her “coalition of chaos”.

In a remarkable turnaround, scores of Labour MPs rose to applaud Corbyn as he entered the Commons chamber less than a year after they tried to remove him with an unprecedented wave of resignations.

Corbyn, who wore a giant red rose on his lapel, grinned and clapped in response towards his own side.

The party leader, who appears secure in his post after losing the election but defying predictions of a meltdown, had earlier won praise from former deputy leader Harriet Harman for “confounding expectations”.

Today Corbyn ridiculed May by repeating a series of slogans from her botched campaign.

Labour awaits a Queen’s Speech – postponed because of Tory talks with the DUP – “just as soon as the coalition of chaos is put together”, he said.

“If that’s not possible the Labour Party stands ready to provide strong and stable leadership in the national interest,” he added.

“Democracy is a wondrous thing and can throw up some unexpected results.”

Corbyn had earlier welcomed his new MPs to the Commons in a traditional event at the doors of parliament.

Labour secured 262 seats in the general election, 64 short of a majority.