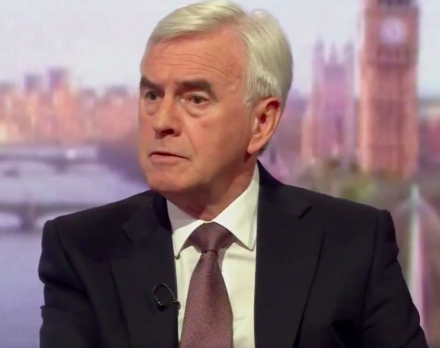 The government must reverse its plans to cut corporation tax for big business, which could then fund a pay rise for our emergency services, John McDonnell has urged.

McDonnell, the shadow chancellor, offers the suggestion after Theresa May’s call to the opposition to help create government policy. He has written to Tory MPs calling on them to support the end of the public sector pay cap – which means for many a real terms pay cut.

The Hayes and Harlington MP said: “Theresa May has called upon Labour and other opposition parties to help develop policies for her directionless government.”

The government’s own figures suggest that cuts to corporation tax will cost more than £2.5bn from 2020 onwards – whereas keeping it at 19 per cent could save the Exchequer twice as much money.

Were the government to cancel the planned tax cuts, they could afford to reverse the pay cap for the equivalent of:

“Labour’s manifesto set out how we would fund a public sector pay rise under our spending plans; however, what I have set out today is the cost of scheduled Tory tax giveaways to illustrate the consequences of political choices taken by successive Conservative chancellors,” McDonnell added.

“I am now calling on Tory MPs to do the right thing and support Labour’s pledge to lift the public sector pay cap.”

“The figures are clear, and they show it can be done, if the political decision is made. As this pay freeze is about political choice, not economic necessity. Therefore, instead of giving a £2.5 billion handout, let’s take the bold action required to ensure a pay-rise for our teachers, nurses and other hardworking public-sector workers”

“At a time when their wages are not keeping up with prices and many public sector workers are really struggling, politicians need to come together to recognise this and act – otherwise our public services will deteriorate and many working families will suffer.”