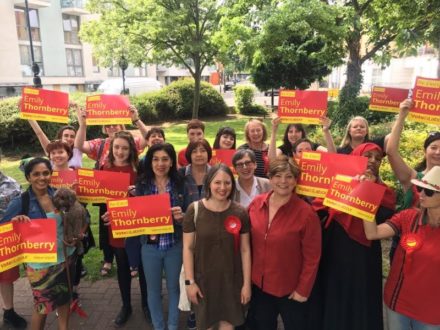 This week’s LabourList poll asks if all women shortlists (AWS) should be used more in local government selections. Numerous recent reports have highlighted the urgent need to increase female representation in local government overall and in leadership positions.

Jeremy Corbyn committed to a gender balanced parliamentary Labour party and supported plans to increase women’s representation at all levels of the party, including local government. To this end, the 2016 Labour party conference agreed a a number of important changes to rules and procedures. One was the phase out all male wards and the other was to extend the use of all women shortlists in council selections.

According to Labour party rules, if members are selecting three positions to represent a council ward, at least one of these candidates should be female. For various reasons, in a minority of cases this rule hasn’t always been strictly enforced. The result has been a small number council wards where all of the Labour candidates are male. Last year’s conference and this year’s NEC (national executive committee) equalities committee agreed that this practice should end. It was particularly noted that the NEC did not want to see any all male wards standing for election in the 2018 London council elections.

Last year’s conference also clarified rules about extending the use of AWS for council selections. While a least one of three council candidates in a ward of three must be female, local parties can also chose to increase this to help them reach a gender balanced council.

It has been an eventful and exciting year for Labour. With everything else going on, opportunity for local parties to increase their use of AWS for council selections has not been widely publicised. This is an option for members and local parties interested in trying to increase the percentage of women standing in their local elections.

For this tactic to work though, you need to have a sufficient number talents, well qualified female candidates. My borough’s LCF (local campaign forum) and women’s forums have been working together over a number of years to identify and train potential council candidates from a diverse range of backgrounds and for 2018 have chosen to increase the number of AWS selections to ensure that at least half the Labour candidates will be female.

It isn’t enough just to increase the number of AWS selections. It is important to identify, train and support a wide variety of potential candidates. Additional training and support is also needed to help more woman, BAME, disabled, LGBT and working class candidates not only get elected but take up leadership positions.

It is vital that our elected representatives reflect the diversity of our communities. There is a lot more to do, particularly in local government, but things are at least moving in the right direction.