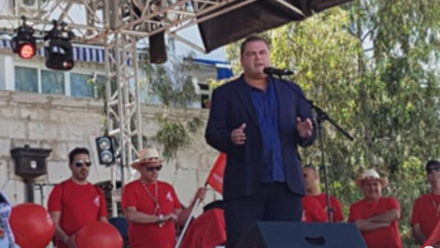 There is a debate taking place within our movement on whether EU migrants to the UK are responsible for a cut in wages and terms and conditions in our country. There have been numerous academic studies that have found scant evidence for this assumption.

Yet the false perception persists, promoted to a large extent by our right-wing media and UKIP’s two decade-long xenophobic mantra, that the wholesale importation of EU workers is undermining those already working within our shores.

Sadly, this disingenuous narrative has taken root within our movement. It helped deliver the Brexit vote. But as we debate the Brexit we want, it’s high time we weeded out this fallacious and, frankly, xenophobic and at times bordering on racist, argument.

As a trade unionist, my response is that we must organise all workers to achieve a better deal across the piece. National origin is neither here nor there. If you were to find a scintilla of evidence which suggests that migration is leading to lower wages, you will also find evidence of unscrupulous bosses, a lack of a statutory living wage and the absence of a properly regulated labour market.

And let’s face it, you’ll also find the failure of our own trade union movement, in which we have been unable to organise many of these workers. I stand and will always stand with the exploited against the perpetrators of exploitation.

Working people have more in common with each other, irrespective of their nationality, than they have with the boss class. To even insinuate otherwise betrays more than a century and a half of internationalism which has made our movement a beacon of hope for global change and justice in the interests of working people. As engraved on Marx’s tomb, “Workers of all lands unite!”.

Our movement must challenge those who wish to divide us by our location of birth. We must use the lessons of how we challenged and successfully fought racism in our workplaces in defence of previous generations of migrants.

The vast and growing inequality our people face is not down to gender, race, sexual preference, creed or national origin. History is thankfully punctuated with incidents in which bosses tried to use our “differences” to divide us and our movement successfully fought back.

The villain of the piece is not the migrant but an economic system which puts profit over human need for the benefit of a tiny elite who have gathered untold wealth at our expense. We must not fall into the trap of blaming EU migrants for the neo-liberal policies which for more than three decades have blighted so many of our communities. The road to socialism is not easy and there are no shortcuts. Blaming EU migrants is also music to the ears of the unscrupulous bosses who will continue to benefit from our divisions.

Of course we need a new economic settlement that leaves no one behind. Labour’s 2017 manifesto, written by Jeremy Corbyn, brought hope — and my wholehearted support — for an economic policy platform that would work in the interests of the many not the few. Migrants must be respected and included as part of Labour’s “many”. The dog-eat-dog mentality promoted by our right-wing media — who have long run to the Tory-UKIP dog-whistle — wants to portray them as the undeserving few. Migrant nurses, doctors, cleaners, rail workers and teachers are the very stuff of our public services.

Allowing Brexit be pitched as EU workers versus British ones is a recipe for disaster. The only winners in this divide-and-rule strategy will be the bosses. As the old slogan goes, unity is our strength. We must fight against the economic conditions that allow these divisive tactics to chime with a proportion of Labour’s electorate.

I am extremely proud that our union supports the Labour Campaign for Free Movement. We do so because we know that building bridges is always preferable to building walls. Our task is to ensure the election of a Labour government with policies that will end the binge the richest one per cent are having at our expense. Nothing short of this will end the blight that many of our communities are enduring, or the fact that millions have been left behind. To argue anything else is short-term electoral populism that will continue to foster fear and hate. Our movement is far better than this!