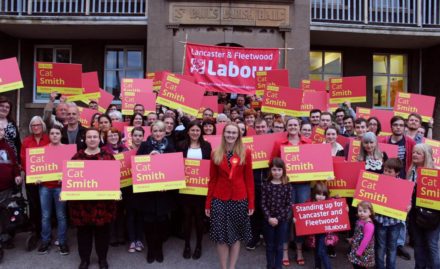 Lots of young people feel their future has been decided for them by another generation. This includes the 1.5 million 16- and 17-year-olds living in Britain who are denied the right to vote by this Conservative government.

There is clearly a democratic deficit across Britain. A recent study by Demos found that only 37 per cent of young adults in feel that politics today reflects the issues that matter to them. An annual study by Hansard Society also found that just 16 per cent of people feel they have influence over national decision-making.

Tomorrow we have the chance to change our democracy for ever. My colleague Labour MP Jim McMahon has introduced a bill to reduce the voting age to 16 and MPs will be voting on whether to extend the franchise to a generation of young people.

The issue of votes at 16 is a clearly a priority for young people. This year 950,000 young people voted in the Youth Parliament’s “Make Your Mark” ballot and votes at 16 was decided as one of their five priority campaigns. It is vital that politicians listen to young people’s views, which is one of many reasons why the Labour Party is so strongly in favour of votes at 16.

The government claims they want a democracy that works for everyone – yet they remain stubbornly opposed to extending the franchise. During a recent PMQs session the prime minister stated: “We expect people to continue in education or training until the age of 18, and I think that is the right point for the voting age.”

The government’s opposition comes as no surprise. During the general election campaign, the Conservative Party made no effort to encourage voter registration, or to put forward policies that would offer real opportunities to young people. Young people have also been disproportionately hit by austerity measures which leave the next generation worse off than the last. Figures for poverty, material deprivation and unemployment, all show young people suffering the most.

The election should have served as a wake-up call to the Tories that they can no longer ignore young people – two million young people registered to vote after the election was called and we witnessed the highest youth turnout since 1992.

A number of Conservative politicians are starting to recognise the importance of listening to young people and have come out in favour of extending the franchise.

Ruth Davidson, the leader of the Scottish Conservatives Party, says she is now a “fully paid-up member of the votes at 16 club”. Damian Green, first secretary of state and minister for the Cabinet Office, is also a supporter and wrote: “It is important for Conservatives to demonstrate to young people… that we take their opinions seriously. Supporting a reduction in the voting age would be a dramatic way of doing that.”

The case for votes at 16 has never been stronger. The experience in Scotland has shown us how successful extending the franchise can be, with 75 per cent of 16- and 17 year-olds voting in the independence referendum. The Welsh Labour government is also looking to extend the franchise to young people. This presents a momentous opportunity to increase the pressure on the Westminster government and strengthen the case for votes at 16 in England.

On Friday a range of arguments will be put forward by MPs on whether or not the voting age should be reduced. Opponents of votes at 16 often object on grounds of insufficient maturity – that somehow people below the age of 18 are incapable of forming world views and having reasoned thoughts. These kind of arguments are unconvincing and deeply patronising.

In many ways 16- and 17-year-olds are the new citizen generation. Through greater access to information, communication, self-empowerment, and freedom to travel, young people have become increasingly socially aware and self-aware of their potential vote-power. This government has also introduced the National Citizenship Service as a rite of passage for 16- and 17-year-olds, with hundreds of thousands having completed their service to their communities, yet they are denied the right to vote.

It is our duty as politicians to catch up with the modern age. One way this can be achieved is to ensure that young people are prepared to participate in our democracy through education and guidance. An educated electorate is an empowered electorate, which is why Jim McMahon’s bill includes a requirement on schools to provide education on democracy and citizenship.

The time for votes at 16 has come. Next year we celebrate 100 years since the start of women’s suffrage. It was only in 1970 that the voting age was lowered from 21 to 18, allowing teenagers to vote for the first time in Britain. Prevalent then were exactly the same arguments that stop 16- and 17-year-olds voting today.

The Labour Party, the Liberal Democrats, the Scottish National Party and the Green Party will all be voting tomorrow to extend the franchise to 16- and 17-year-olds. If the Conservatives want to demonstrate to young people that we take their views seriously, I hope they will do the same.

Our past is littered with bold actions, proud speeches, and even lives lost to win and defend the right to vote. So let’s work together to extend the franchise and build a democracy that works for the many not the few.

Cat Smith is shadow minister for voter engagement and youth affairs and MP for Lancaster and Fleetwood.