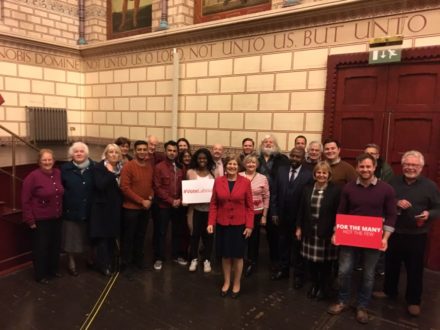 A former Labour MP has seen off the challenge of the Labour left to stand again in the swing seat of Northampton North.

Sally Keeble, who represented the middle England seat between 1997 and 2010, has been selected to contest the seat she lost narrowly in the last three elections.

Keeble, a former transport minister, emerged ahead of Anjona Roy, a union-backed activist championed by supporters of Jeremy Corbyn, who campaigned with the slogan “consistently Corbyn”.

“Delighted to be selected to fight Northampton North for Labour”, Keeble wrote on Twitter after the hustings and vote on Saturday.

Many congratulations to my friend @Sally_Keeble on being selected as the @UKLabour candidate for Northampton North.

Michael Ellis, the Tory MP, saw his majority cut from 3,245 to just 807 at the last election. Labour is selecting candidates for 75 swing seats in the run-up to Christmas.