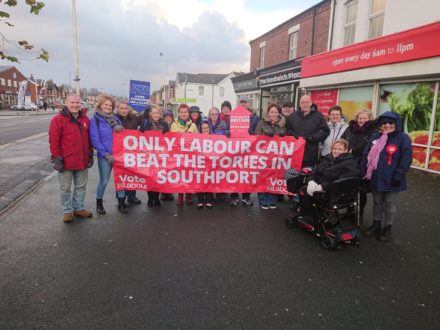 A highly experienced parliamentary candidate with backing from unions Unite and GMB has won right to contest Southport for Labour for a third time.

Liz Savage, who stood for the party in the Merseyside seat in 2015 and 2017, last night saw off the challenge of local councillors and other trade union activists.

She was on an all-women shortlist of five, as revealed on LabourList yesterday, and now aims to take the Labour target seat at the third attempt.

The other candidates who had made it through to the final round were Cheshire activist Mandy Clare, local campaigner Janet Harrison and councillors Anna Rothery and Carla Thomas.

Damien Moore, the Tory MP elected this year, has a majority of 2.914 after sitting MP Lib Dem John Pugh decided not to stand again in June.

Congratulations @LizSavagelabour selected as @SouthportLabour candidate. Commiserations to @CarlaThomas29 @JanetforKew Now let’s win the seat for @UKLabour and help get @jeremycorbyn into Number 10 and our brilliant manifesto into practice.