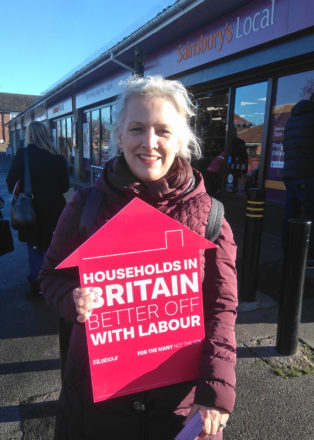 A councillor and local housing campaigner has won the selection for a Yorkshire target seat.

Fiona Derbyshire has been picked to contest York Outer, where the Tories’ majority fell from more than 13,000 to 8,289 at the last election.

Derbyshire, who is Labour’s housing spokeswoman on the Tory/Lib Dem-controlled York City council, won backing from Momentum, whose local group said they would “mobilising everything” to help get her elected.

The school business manager also received support from GMB, her own union. Now she will go up against Julian Study, the Tory farmer who was first elected in 2010.

“It is an incredible honour to be selected by local party members to be Labour’s candidate here in York Outer at the next general election,” Derbyshire said after winning the selection from an all-women shortlist of four people.

“The Tories are failing to find answers for the big issues affecting York and the country. Lurching from self-made crisis to self-made crisis is not government. We need a government that will tackle the crisis in our NHS and adult social care, get to grips with the issues that matter to local people and ensure we have an economy that works for the many, not the few.

“People in York Outer deserve an MP who will protect their jobs and the services they value and fight for a fair deal in parliament.”

We are delighted to share that Fiona Derbyshire has been selected as the parliamentary candidate for York Outer. YO is a target seat for the next election and we will be mobilising everything we have to help Fiona take the seat from Julian Sturdy for Labour.