Some of Jeremy Corbyn’s ideas pass through the same three stages that Schopenhauer said applied to all truths. Firstly, they are dismissed. Secondly, they are violently opposed. And thirdly, they are accepted as self-evident.

Before the last general election was announced, the Labour leader called for a wage cap on bosses of government contractors. He said executives should earn a maximum of 20 times the wage of their lowest paid worker: likely about £350,000. At the time, critics scoffed that the idea was “utterly mad”. Since then, opposition from fat cats has grown, especially from US banks.

Unsurprisingly, the world has now moved onto the acceptance stage. Or, at least, nearly so. While not exactly the same as Corbyn’s proposal, my colleagues in the European parliament have proposed a “remuneration ratio”, according to which banks must determine the ratio of pay for individual board members through a comparison with the median pay of staff. It is not fair that the richest in society continue to get richer, while wages for normal people are set to stagnate for the next 20 years. Top bankers earning huge bonuses should be aware that the cleaners and cooks who work on different floors are the taxpayers who helped bail them out in 2008.

The EU draft proposal directly addresses this, explaining that “differences in the remuneration of the board members and employees of individual institutions have increased disproportionately”. Large banks will be forced to set, apply and disclose a maximum pay ratio, which they cannot exceed.

Wage inequality in the finance industry affects people from all backgrounds, but women suffer disproportionately. Female staff in banking jobs are paid 40 per cent less than men, partially because they are only appointed to 14 per cent of the so-called “top jobs”. If we are to properly overhaul the banking system and make it fairer, we can’t ignore gender.

The Treasury review from 2016, which exposed these shocking statistics, called for executive pay to be “somehow linked” to the number of females at the top of the firm. This is not the only way to address gender discrimination in the industry with the widest gender pay gap in Britain, but its certainly a start. Transparency would also help make banks more interested in paying each gender fairly, while public authorities could encourage them by refusing to work with firms that only reward men.

The EU’s legislative proposal to cap bankers pay according to workers’ median salary has not yet passed, but it shows how fast the agenda has changed. People in Britain and across Europe have had enough of a political system which allows eight men to own as much wealth as the bottom 50 per cent of the world.

It cannot be forgotten that Britain is in the process of leaving the EU, but a rare certainty from the government’s shambolic plan is that all EU law will turn into British law on the day we leave. However, it’s likely that this legislation will be one of the first targets for the hardcore Brexiteers. If they do this, it will demonstrate once and for all that Brexit is not a project to make Britain fairer for its people, but to deregulate until the rich get even richer. As we restructure our laws, we must keep any restrictions on bankers’ pay. Not only that, we should tighten the rules, so that board members pay packets are also constrained by the fairness of pay for women.

Neena Gill is a Labour MEP for the west Midlands. 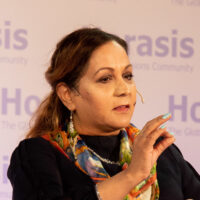 Neena Gill CBE is a Labour MEP for the West Midlands.

View all articles by Neena Gill