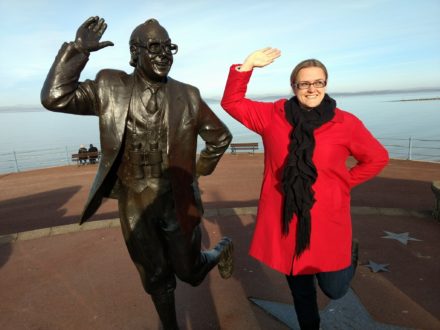 A county councillor with backing from a senior shadow cabinet minister won a tough selection battle in Morecambe and Lunesdale ahead of an activist who was backed by Momentum and a series of trade unions.

Lizzi Collinge will take on the Tories in the target seat following her triumph in a three-way contest this week.

Collinge, who received support from Labour campaigns and elections chair Andrew Gwynne, praised her rivals for staying “comradely in everything they did”.

She beat Erica Lewis, a former aide to Corbynista frontbencher Cat Smith, who was endorsed by Momentum, Unison, the GMB and the CWU. The other shortlisted candidate was Julie Reid, a councillor in Manchester.

Tory MP David Morris held Morecambe and Lunesdale with a majority of 1,399 in June, down from 4,590.

Collinge, pictured above beside the statute of Eric Morecambe in the town that provided the comedian with his stage name, has campaigned regularly on the local NHS.

“Thank you Morecambe and Lunesdale! I’m very pleased to say that I’ve been selected to be Labour’s prospective parliamentary candidate for the constituency,” she wrote on Facebook.

“Erica and Julie ran fantastic campaigns and were always comradely in everything they did. They are an example to everyone.”