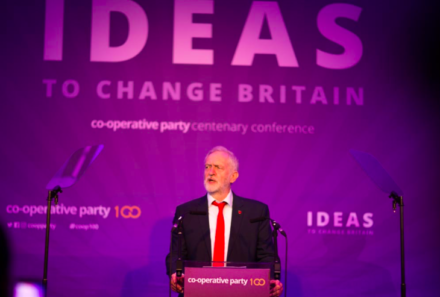 I was lucky enough to be part of the Chelmsford Star co-op party delegation to the Co-op Party’s centenary conference in the autumn. On the whole the conference, which had a theme of ‘ideas for the future,’ was a positive one with lots of creativity flowing.

One of the highlights was of course Jeremy Corbyn addressing conference and speaking about how the spirit of Co-operation would be an integral part of the next Labour Government’s plans to rebuild Britain.

On a side note I was also very impressed with Oldham MP Jim McMahon who spoke passionately about his fight to get sixteen and seventeen year olds the vote. Something, as a teacher who sees first-hand the maturity of some of our young people, I fully support.

As part of the conference program we discussed a number of policy topics. I was pleased to see that one of the topics to be discussed was education. Although it was great to hear contributions from Tracey Brabin MP, part of the shadow education team, who replaced an injured Angela Rayner, I have to say I was a little disappointed, as a teacher myself, that a debate as such didn’t happen.

The issue of Co-op schools is not a new one and to many it’s not a particularly contentious one either. There are a number of Co-op academies across the country, in Essex I have friends who work in some and speak very highly about the ethos that has been created by management, staff and the governing body in these schools.

I would certainly agree that the Co-operative ethos that these schools have is something to admire and seek to replicate. I would also say that while we have the current Government’s splintered education system, where academies and free schools have shrunk Local Education Authorities to a fraction of their original size, academies run by trusts operating a truly Co-operative model is definitely a good thing.

A possible alternative is a predatory academy trust taking over and trying to run the school like a business, something that during a period of forced austerity cannot be good for their students.

However, my question would be that when we do return a Labour government to power should we seek to return power to Local authorities, I very much think we should and so by the way do many of my colleagues in the Co-operative Party, but that if we do what is the future for Co-operative academies?

It is pleasing to see that the Co-op party’s own policy paper ‘Instilling co-operation into learning’ talks about the issues surrounding the Tories decision to  replace local authorise with unelected regional schools commissioners and agrees that the oversight and governance that LEAs had should be restored.

This would presumably mean that Co-op academies would also fall under the remit of the local authority?  I know that this is not a view shared by everyone in the Co-op movement who see LEAs as run by people who are as out of touch as the aforementioned commissioners.

If Co-op academies do fall back into the remit of the local education authorities then the question we should be asking moving forward is how we can ensure these schools retain their Co-operative values and ethos. In addition how both the Labour and Co-operative Parties can ensure that more and more schools have a greater understanding of these ideals.

I am unsurprisingly of the view that much of what has happened in education in the last seven years has been both negative for both staff and students. However, to end on a positive note I also think that if anything positive is to come from the Tories unnecessary, costly and damaging acadamisation and free school policy it is that in some schools the spirit of Co-operation has been able to flourish. When the Labour Party is returned to Government – and I’m becoming more and more convinced we are not a long far from that happening – it would be nice to see the spirit of Co-operation flourish in the good times as well as the bad.