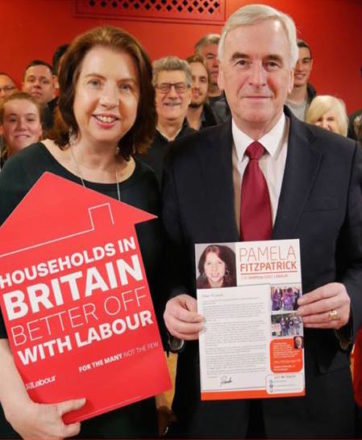 She narrowly won on the first round of voting over Kiran Ramchandani and Maria Jennings. It was a close call between two local councillors, with Fitzpatrick picking up 83  votes and Ramchandani securing 77.

The selection results were expected to come out earlier but a complaint was made over a number of postal votes not being received, LabourList understands.

Fitzpatrick set up the Harrow Law Centre, providing advice to people living in the local area, and her selection bid was backed by John McDonnell, Unite, Momentum and Owen Jones.

The sitting MP, Bob Blackman, had his majority reduced to 1,757 in June, when Navin Shah contested the bellwether seat.

Labour lost the constituency in 2010. Uma Kumaran stood as the Labour candidate against Blackman in 2015, but said she would not do so again after the Tory MP’s “unashamedly religiously divisive” campaign.

Journalist Sunny Hundal tweeted at the time that Blackman was “playing Hindu divide-and-rule caste politics” and the Conservative leaflets in Harrow East were later described as a precursor to Zac Goldsmith’s mayoral campaign.

If the Labour Party is to win the next general election, Harrow East should be taken, along with neighbouring marginal seats Finchley & Golders Green and Hendon.

I am absolutely delighted to have been chosen to be the Labour PPC for Harrow East. I have been overwhelmed by the messages of support I have received. Thank you.