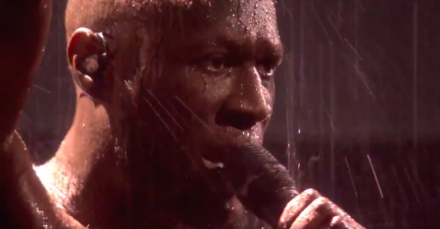 Stormzy, the grime artist who has previously endorsed Jeremy Corbyn, used his performance at the Brit awards last night to attack Theresa May’s response to the Grenfell fire.

The 24-year-old grime rapper also known as Michael Omari won best British male and British album of the year at the Brits 2018.

He gave a performance that featured a freestyle rap with powerful lyrics about the Tory government’s handling of the Grenfell disaster.

“What, you thought we just forgot about Grenfell? You criminals, and you’ve got the cheek to call us savages. You should do some jail time, you should pay some damages, you should burn your house down and see if you can manage this.”

⭐ @Stormzy1 made it rain GREATNESS with his performance of ‘Blinded By Your Grace, 2’ and ‘Big For Your Boots’ with a blistering freestyle in the middle! 🔥 #StormzyBRITs pic.twitter.com/qahDE7QLr5

He was praised by Labour MPs including Jeremy Corbyn, David Lammy and Emma Dent Coad on Twitter.

Congratulations @Stormzy1 for winning your first #BRIT award, and what a powerful performance. #Grenfell

“Theresa May where’s the money for Grenfell? You think we forgot about Grenfell?”. Respect @Stormzy1 speaking truth to power. #BRITs2018

Thank you for speaking truth to power, @Stormzy1. “Theresa May where’s the money for Grenfell? You think we forgot about Grenfell?” he sang live on the #BRITs. In Kensington we will never forget. We will never stop fighting for Justice. No justice, no peace.

READ – Diane Abbott: The government is risking another Grenfell disaster