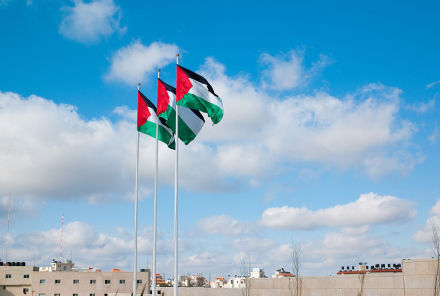 The pictures of16-year-old Palestinian teenager Ahed Tamimi slapping an Israeli soldier in the face went viral. Since her arrest in December there has been a global campaign for her release, although she remains imprisoned awaiting trial by military courts in Israel. Her case represents the sort of continual challenge the Labour Party will face on Palestine.

There is now widespread evidence that most Palestinian child prisoners are arrested at night, forcibly removed from their homes and families without access to legal advice or independent adult supervision. Many are shown and pressured to sign ‘confession’ documents written in Hebrew, for most a language they cannot read, then detained inside Israel. This is in contravention of article 76 of the fourth Geneva Convention, which says prisoners should be detained in the occupied country, not transported to the occupier’s territory.

Just exactly what was Ahed’s offence? She was trying to remove the Israeli soldier from her family’s property. She might have hurt the soldier’s pride, but was obviously not a physical threat. Watch the video and judge for yourself. In fact, the offence is the other way around – the military occupation is illegal under international law; the soldier shouldn’t have been there in the first place. Ahed had every right to resist his presence on her family’s property.

The Palestine Solidarity Campaign (PSC), along with many others, are calling for:

Israel’s treatment of child prisoners has been criticised by the UN, by Emily Thornberry recently for the Labour Party, by the FCO and by Alistair Burt for the present government.

In June 2012, a team of UK lawyers published a FCO-funded independent report, Children in Military Custody. It found Israel guilty of at least six breaches of the UN Conventions and made over 40 recommendations; the FCO accepted the report’s findings and promised to take them up with the government of Israel. Over a year later little or no progress has been made.

That’s simply not good enough. This will be the challenge Labour will face in Government. An ethical foreign policy, as is rightly being advocated by Emily Thornberry, must include Palestine as a key issue to be credible. Based on international law, human rights and equality – it will need to be more than well-meaning words. There will be a global role for a progressive Labour Party to lead international opinion and get a response from an intransigent Israel, especially if still supported by a Trump White House.

This year it will be 70 years since Palestinians were forcibly expelled from their land and villages to enable the creation of Israel. Now is the time for UK governments, but especially a Labour one, to step up the pressure.

We would want a Labour government to:

Until Israel ends its military occupation of the West Bank, East Jerusalem and Gaza there will be thousands more Ahed Tamimis – deprived of their childhood, deprived of their freedom. Labour’s challenge will be to try and ensure that there are no more.

Hugh Lanning is chair of Palestine Solidarity Campaign and former deputy general secretary of the Public and Commercial Services Union.

Hugh Lanning is a representative of Labour and Palestine. He is a former deputy general secretary of PCS and former Labour parliamentary candidate.

View all articles by Hugh Lanning