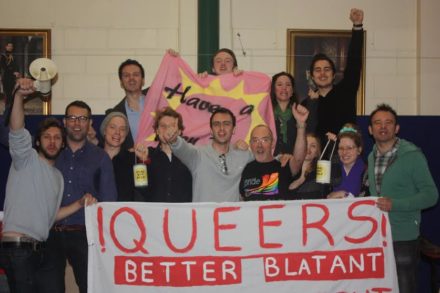 Pride had its premiere at the Cannes Film Festival in 2014. It received an eight minute standing ovation and in that audience the group with the loudest voice singing its praises took everyone by surprise. It was the school kids.

Since the movie was released I have witnessed that same reaction from people under 21 time and again – in particular teenage girls. Being witness to this gave me the answer to a question that I am asked frequently, the question being “are young people today less political?” Clearly not, and I think the number of young activists isn’t going to change significantly from one generation to the next.

It will always be a minority who are motivated to become active, although when seismic shifts occur a whole new raft of people will temporarily swell activist numbers. Seismic shifts in Britain such as the post-Second World War settlement when Labour Party and trade union membership soared; the anti-nuclear movement during the dangerous and frightening Cold War days of the 50s and 60s; the 1984-85 miners’ strike; the Labour Party now being the largest party in Europe.

Why has Pride had such resonance with young people? Well, it’s a brilliant piece of writing and directing by Stephen Beresford and Matthew Warchus and it is based on a true story about ordinary people who fought against an immensely powerful enemy. Thatcher the milk snatcher’s narrative was T.I.N.A. – There Is No Alternative. That was a lie just as much as ‘austerity’ is a lie, and just as much as the ‘necessity’ of having to personally pay for higher education is a lie.

I re-joined the Labour Party in 2016 after a gap of forty years because Jeremy Corbyn has had a track record of consistently being principled and on the right side of history – whether it is championing LGBT+ equality, fighting apartheid, saying no to war and yes to peace through negotiation, or fighting for trade union rights. I think this is also why he has such a strong appeal to the young. In his leadership, they can see integrity, determination, authenticity and consistency. In Tony Benn’s words, Jeremy is a sign-poster not a weather vane. That simple but powerful message, “for the many, not the few”, offers hope and empowerment.

I’ve had young people who are anxious to become active ask me at meetings: “But which cause should we support?”. I tell them: “any cause”. We on the Left have every cause on this planet to support, whether it’s defending refugees or campaigning against fracking. What we need to remember is that all our causes are inextricably linked.

That’s what us silver hairs in LGSM knew and it is why we did what we did. These causes are the dots that we must join together against only one enemy, namely the super-rich. They are richer now than ever in human history and they will stop at nothing to maintain their power over the 99 per cent. They have only ever had one tool in their armoury and that is to keep us divided, to set us against one another. But we can – we must – beat them for future generations and for our planet.

There is a lot to be hopeful about. In my lifetime I have seen the emergence of black, women’s, LGBT+ and disability movements that have changed consciousness beyond measure. The price of freedom is eternal vigilance: we must heal divisions within our movement with bravery and determination for the common good. Across the generations, I stand shoulder-to-shoulder with the young – with the many.

View all articles by Mike Jackson