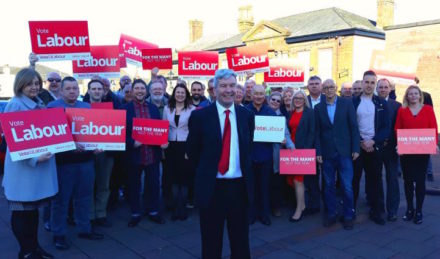 After a heated contest, Momentum-backed local councillor Tony Lywood has been selected by members to fight the key seat of Copeland for Labour at the next election.

Speaking after the selection, Lywood said: “I’m really pleased to have been selected as the Copeland candidate for the next election. It is a real honour and I’m humbled that local members have put their faith in me.

“I will be out there talking to voters campaigning tirelessly so that Labour can win in Copeland. We don’t know when the next general election will be but I’m looking forward to the hard work ahead.

“As a local councillor I have seen the worst impacts of Tory policies here in Copeland with rising poverty, low wages and insecure housing.  I know that only a Labour government can bring the change we need to make people’s lives better.”

Shadow frontbench MPs Jon Trickett, Angela Rayner, Richard Burgon and Laura Pidcock all publicly supported Lywood in the selection race. He was congratulated on his win by Chris Williamson on Twitter.

Huge congratulations to Tony Lywood (@TonyForCopeland) who has been selected as Labour’s candidate for Copeland. He’ll be a formidable candidate and a great MP. Very best of luck Tony https://t.co/AaqlAZB7fS

He also had the backing of Corbyn-supporting group Momentum – a decision that proved controversial with some local members, as it was pointed out that he had vocally opposed Corbyn during the second leadership election.

In Facebook comments posted in 2016, Lywood claimed he would “never” support Corbyn and described the leader’s policies as “bonkers” and “unworkable”.

The Keswick councillor won over homelessness expert Rachel Holliday, who also lost out on being selected for the seat last year although she was thought to be the leadership’s preferred candidate at the time.

Gillian Troughton, who fought the seat at the last two elections, former MP Thomas Docherty, Shropshire councillor Usman Ahmed and Allerdale councillor Mark Fryer made up the rest of the six-strong shortlist.

Incumbent Tory MP Trudy Harrison took the seat from Labour in a 2017 by-election, after Jamie Reed stood down to take a job in the nuclear industry, and held onto it in June. She campaigned on a strong pro-nuclear platform. Her majority is just 1,695.