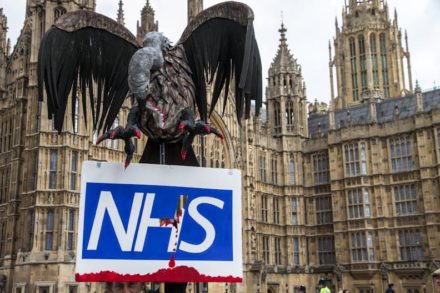 Jeremy Hunt often claims to be “appalled” when NHS patients are let down. He is not alone. Dorset 999 recently consigned my 89-year-old step-pa to a 19-hour wait just a few days after his slightly younger sister endured a 9-hour wait on the floor when she broke her hip. W all know where to point the finger of culpability, and it’s not at the overstretched and underfunded ambulance service.

We’re in search of a cure for our bruised, cut and burnt National Health Service. What can we do? In his LabourList piece last week, Ed Jones wrote of a need for a third age for the NHS. The population is rising and there are many more of us with multiple and complex conditions. ‘NHS Model 3’ needs to be fit for purpose – and definitely not bear any resemblance to Hunt’s breach of anti-laundering rules.

Do the ideas Ed Jones put forward have any real traction for a healthier future? Do we dive headlong into the sustainability and transformation partnership (STP) model he promotes, with no more questions asked? To create a sustainable, 21st-century model, we must look to both Bevan’s principles and the aetiology of the Health and Social Care Act itself.

In 2011/12, I wrote ‘Breaking the NHS through Reckless Reforms‘. Far from finding a positive chink in the armour of the now notorious piece of legislation, it emerged as a prophesy of doom and gloom. Now the prospect of Theresa May offering up the NHS as a golden carrot for post-Brexit US trade deals, with a side order of chlorinated chicken, is an added grave concern.

Unfortunately, the fundamental practice promoted by Ed Jones of GK Strategy is far from best and will simply compound matters. The premise attempts to fit the NHS into a continuing austerity model far away from anything Attlee would have been happy with. The STP model has been brought across from the US, so we must look closely at Virginia Mason Hospital in Seattle, Kaiser Permenente and of course the ubiquitous McKinsey – who have even been contracted to assess their own North West London initiatives. Conflict of interest is all around.

Even if a shift in care from hospitals to the community can be achieved, making financial savings as a result – as is projected in STPs – is much more difficult than often assumed… There is little evidence to suggest that efforts to date to shift care into the community have significantly reduced costs of care – and in some cases the evidence suggests that community-based care can increase costs. (Imison et al, 2017; Nolte and Pitchforth, 2014)

The whole assessment is peppered with words of caution and even alarm. With expected population growth, it will take “heroic efforts simply to manage rising demand within existing hospital capacity” in the five STPs proposed for London. There are another 39 STPs in the regions and we now have the addition of Hunt’s accountable care organisations (ACOs), against which we await the results of the Judicial Review, and back-of-a-fag-packet integrated care organisations (ICOs). We now need a ’39 Steps’ cipher to disentangle the whole sorry mess.

It is also dangerous to generalise that all clinical services should be centralised – while it succeeds for stroke, trauma and cardiac arrest, for conditions such as placenta previa, sickle cell crisis, peritonitis and respiratory failure, an extra 20 to 30 minutes stuck in traffic or dashing across 40 miles over rural terrain can prove fatal. Urgent care centres are not equipped to deal with such emergencies. Hunt’s failed plan to close Lewisham A&E and leave just one facility per 750,000 highlights this point. We also know that hot on the heels of the closure of popular walk-in centres, a significant drop in GP numbers has already begun. Indeed, some STP plans include a further drop to make the pennies work.

STP planning figures are hypothetical. The danger lies in the detail. For instance, South West London is consigned to an estimated 44 per cent bed use drop by 2021 – yet we witnessed a black alert spike at Epsom/St Helier this winter and community provision in dire straits. Meanwhile North West London will be treated to a bed drop of 500 and the projected loss of thousands of staff – and yet as soon as two other A&Es were closed, Northwick Park immediately spiked and stayed at the highest waiting times in the country. Notably, Imperial College NHS Trust has since lost two CEOs in quick succession.

The five-year plan also tells us that NE London must somehow lose 19 per cent non-elected surgical cases and North Central 2o per cent of elected surgery. Even now, cancer care is also descending into chaos and the maternity unit at St Mary’s Paddington has been put under such pressure since the ill-advised closure of Ealing Maternity Unit that it now finds itself in special measures. Mid Staffs/Stoke can testify to something similar – this is by no means just a London problem. In the south, the highly respected Sir Bob Kerslake has resigned as chair of King’s, saying “it cannot be done!”

Ed Jones’ picture of improving population health applies only to the affluent. As a direct result of austerity, health inequality is rapidly rising. For the first time in 100 years, health outcomes and child mortality rates are worsening – deaths involving malnutrition are now not uncommon, TB and rickets have reappeared – and not just amongst the 50 per cent more homeless who have sadly died too soon. In the borough with the widest inequality, Kensington, there is a shocking 45-year life expectancy gap between the richest and poorest. In the first seven weeks of this year, 10,375 extra (12 per cent rise) deaths appeared in national data. We can surely see that the principles of Bevan are, if anything, more important than ever.

The RCEM campaign winter flow project and You Deserve Better campaign highlight the dangers of under-resourcing. The reality is that we have witnessed a 50-55 per cent drop in all beds over the past 15 years – and today Jon Ashworth reveals 82 ‘ghost wards’ of 1,429 mothballed beds. All this is largely due to a significant drop in funding as a percentage of GDP, which equates to a £24bn gap. We have plummeted from a maximum 8.8 per cent growth under Blair to a measly 1.1 per cent under May.

Once again, reference to the King’s Fund reveals that the promised and vaunted £8bn is actually £4.6bn. Along with restoring our missing funding, we urgently need to ensure that the 100,000 unfilled vacancy staffing crisis is halted. In some maternity units, women in labour report being denied routine painkillers due to a lack of staff available to administer them. We also hear of mental health wards with too few qualified staff – units to which highly distressed young patients are sent hundreds of miles to access.

The steep drop in nursing applicants can only be reversed by a return of the nursing bursary along with a safeguarding of EU workers, who currently make up 3.4 million of the UK health and social care workforce. Remaining staff also deserve far better than the new wholly owned subsidiary model.

Ed Jones rightly highlights the need to make best use of funding and for better value procurement. But why then would Hunt seek to adopt a notoriously inefficient US model for our NHS? In all of this, GK Strategy oddly decries the ‘sidelining’ of the private sector in health whilst exposing exactly how much of taxpayers’ money has been siphoned off.

This is all to fit into a funding box designed with a low taxation tool kit – not to be measured by either public need for the service. In order to establish a successful, sustainable NHS, we must free the service from the stranglehold of the private sector, which is devouring the service via the internal and external markets.

For ‘Model 3’, the Health and Social Care Act and Section 75 (which allows the likes of Branson to claim millions in ‘damages’) must be taken out of commission. Until the NHS is unfettered from financially wasteful privatisation, as well as the impact of PFI burdens, there will be no relief for any of us.

Essentially, STPs and their ACS cousins are prescribing un-anaesthetised radical surgery for malnutrition. The choice is stark – re-shape and shrink the NHS, social care, adult mental health services, CAMHS and public health into a McKinsey/GK-shaped austerity and privatisation box, or take on the Labour Party approach.

We must reduce health inequality through sensible measures that rescue our NHS with social care, mental health and public health integrated into a state-run service, publicly-funded through fair taxation models. The latter will create a wrap-around NHS of which both Attlee and Bevan would be proud. The cost to the country of doing otherwise will surely be more than we can bear.

Jos Bell is chair of Socialist Health Association London and leads on health and wellbeing at the Fabian Women’s Network.

In response to this article, South West London Health and Care Partnership said: “We clarified in our refreshed STP document in November 2017 that we have no plans to increase or decrease the overall number of beds in south west London.”

“In February 2016 one bed audit carried out in south west London hospitals suggested that around 44% of patients in our hospitals at the time could have been better cared for elsewhere. This finding was reported in our draft STP document and was misinterpreted in some reports, which wrongly suggested that we intended to reduce the number of hospital beds by that number. This is not and never was the case.”

View all articles by Jos Bell