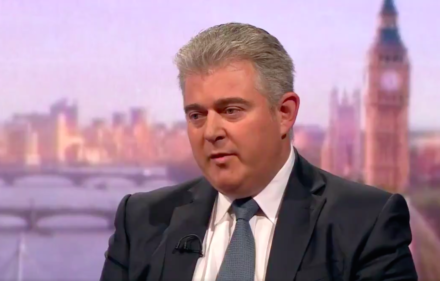 However, the MP Great Yarmouth claimed an “ambition” was different to a “target”.

Marr: If you talked to her she must have known there were targets.

Lewis: What the Home Secretary was very aware of was her ambition to see an increase in the number of people who were here illegally that we were removing… But those internal targets were not in the memo and were not figures that she was aware of.

Marr: She had put 10 million quid in to a 10 per cent increase in deportations. If that is not a target, what is it?

Lewis: Well actually what the Home Secretary had done, having allocated a further £10m to that team, was said to the team ‘what will the impact of that be?’. And that 10 per cent is an ambition…

Marr: So the defence of the Home Secretary: it is an ambition, not a target?

Lewis: Well actually there is a big difference between the two things.

“So the defence of the Home Secretary – it is an ambition, not a target?” asks @AndrewMarr9

“Well actually there is a big difference between the two things.” replies @BrandonLewis#marrpic.twitter.com/OGIdFW0LLW

The Tory chairman’s attempted defence of Rudd has not been deemed convincing.

Latest attempt to shore up @AmberRuddHR by former immigration minister @BrandonLewis = she DID know about 10% target to increase deportation of illegal immigrants but did NOT know about numbered targets for deportations in regional offices. Hope that’s clear #marr

Tory party chairman Brandon Lewis confirms that he talked to Amber Rudd about her ambition to increase enforced removals by 10% but denies telling her about specific internal targets. Now trying to split the difference between “an ambition” and “a target”.

Shadow Home Secretary Diane Abbott commented: “Brandon Lewis’s attempt to save the Home Secretary’s career by hiding behind semantics is insulting for the people who have been affected by the Tories’ heartless policies.

“Beneath the spin, he let the truth slip and sealed her fate. Amber Rudd knew of the targets she pretended didn’t exist.

“The Home Office was fully aware that lives were being ruined as a result of their ‘hostile environment’ but pressed ahead anyway. It’s time for Rudd to go.”