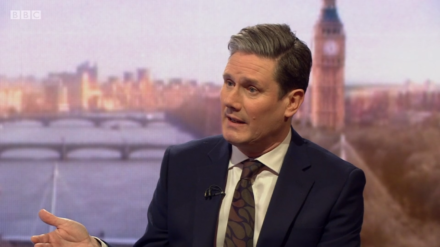 This time last Friday all the talk in Labour circles was of the party’s disappointing results in the local elections in working-class, Leave-leaning towns. But a week is a long time in politics. Now the party’s conversation is back to the question of whether to back a super-soft Brexit or even a second referendum.

You can see the contradiction. Within a week Labour folk have swung from reconnecting with Brexit-backing voters to pro-EU agitation. And oddly many of the loudest advocates for a softer Europe policy are the same people who say they are so worried about lost Leave voters.

Of course, Labour must give working-class Eurosceptic voters lots of other good reasons to vote for the party. But we also have to face facts. If Labour looks like it is trying to nakedly undermine their Brexit choice, it’s not going to win many of them back.

Winning Leave voters back isn’t something Labour can find a way around. There is no path to a majority that does not go through the marginal suburban and small-town seats that backed Brexit: there just aren’t enough big city and university seats still left to win.

It is true that most voters aren’t focusing on the minutiae of the Brexit talks. But Labour’s tone does matter. The party leadership must sound like it wants to respect the referendum, especially while almost everyone who voted leave still wants out.

Personally, I’m a lifelong Europhile and the disaster of Brexit has made me back the EU more, not less. But I recognise the difference between individual opinion and the official party line. It is absolutely fine for Labour backbenchers and pressure groups to take a strongly pro-EU stance. Andrew Adonis is the antidote to Nigel Farage: a useful outrider who pulls the centre-of-gravity in the right direction.

But that is different from saying that the official Labour position should race quickly into the space the agitators create. Ultimately Labour may end up backing single market membership or a second referendum. But the way that happens matters. The party needs to look like its policies are driven by necessity rather than pro-European zeal.

As things stand, Labour can say that about its support for a customs union. You can think of it as the hardest version of soft Brexit. It offers a possible route to an open Irish border and to safeguarding manufacturing supply chains, but one that permits some divergence.

And unlike the Conservatives’ mooted alternatives, you can see how a customs union might work in practice. Ministers are discovering the hard way that there is no workable middle-ground between a single tariff zone and an ultra-hard Brexit, which betrays Northern Ireland, undermines British business and shreds last December’s first stage agreement.

By contrast, Labour’s position looks pragmatic and moderate. It attracts the support of business and the Tory rebels. It will probably secure a majority in the House of Commons, which is why Theresa May is so terrified of bringing any Brexit legislation back to the Commons.

For now, these conditions do not apply to the single market option. It is possible that the customs union will turn out to be necessary but not sufficient, for the sake of business and the Irish border. But so far the pro-EU camp has not proved that case beyond doubt. It has certainly not shown that the upsides of the EEA are unquestionably worth the price of ‘rule-taking’ and minimal migration controls.

If the polls were showing a steady remain majority of 60 per cent or more, then the case for the EEA or another referendum would be strong. But they are not. Opinion is still split right down the middle and barely any leave voters have changed their mind.

Labour must therefore both lead and follow public sentiment. It can lead by demolishing the Conservative plans and showing they cannot work, and it can shuffle gradually towards successively softer Brexit positions – as long as it feels like it is for the sake of necessity not ideology.

Public opinion doesn’t move fast, so the party needs to ‘show’ people not ‘tell’ them that the alternatives are unworkable. It must go at the pace that the disengaged voters will permit. This is hardly inspiring politics, but the job is to win the grudging consent of median opinion not the love of the passionate pro-European few.

We’ve learnt that the Brexit process is a steady game of chess not a sudden tug-of-war. There are many actors, of which Labour is just one. Advantage builds slowly, through successive moves. And it’s hard to see ahead very far into the future.

Labour needs to take its time. The party can end up saving Britain from hard Brexit – but only if it plays the long game.

Andrew Harrop is general secretary of the Fabian Society and author of Labour’s Brexit Dilemma, published by FES-London.