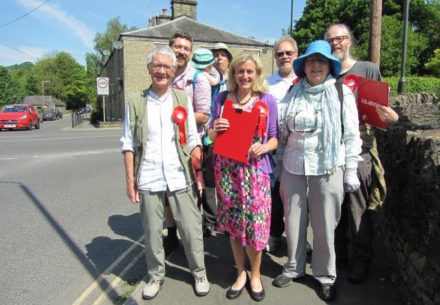 Nestled in the shadows of the mighty Kinder Scout, the highest point in the Peak District, the picturesque village of Hayfield in the High Peak never fails to attract those wanting to explore this stunning corner of Britain’s oldest national park.

The pubs in Hayfield enjoy a bustling scene and none so more The Royal Hotel. One Friday night last month, The Royal was livelier than usual, with locals congregating at the pub for a live music event in aid of Hayfield and New Mills Labour branch.

Over 100 people watched the iconic High Peak covers band The Beachcombers thrash out legendary tunes from the ’70s, ’80s and ’90s in a gig that raised more than £700 for the Labour branch. The MP for High Peak, Ruth George, joined revellers on the dance floor, in between handing out raffle prizes and talking to constituents.

Julie Gough, a Labour member and loyal patron of the Royal Hotel, said: “The gig was really great in every respect. We were so grateful to the band for agreeing to play for free. The turnout was fantastic – from locals and not-so-locals I think. The Royal Hotel got some good business out of it and the attendees enjoyed a great dancing session. The local branch made a bit of cash too, so there’s something in the coffers if and when we need to campaign for an election.”

“The fact that Ruth George turned out for us on her way home from Glossop was a real bonus. I don’t think anyone has ever doubted her commitment to the party and the local branches, but this really was beyond the call of duty. She read out all the (far too many) raffle tickets with a good grace too, and even enjoyed a bit of a boogie.”

Such was the success of the night that the New Mills and Hayfield Labour Branch is planning other music events with local bands who are Labour supporters. “The money will be used to fight local elections next year, and a general election if we have one hopefully! It will be spent on newsletters and leaflets,” says Catherine Hughes, secretary of the New Mills and Hayfield branch.

The jubilant atmosphere at the recent gig epitomised the broader feeling of encouragement and hope since Labour snatched the High Peak seat from the Conservatives in the 2017 snap general election. Over the last 12 months, Ruth George and her team have been working tirelessly to help improve the lives of the people living in the High Peak and overcome the challenges of this rural borough of Derbyshire.

From campaigning against plans to cut library services, to opposing further cuts to local schools, Ruth George and High Peak Labour’s diligent efforts are being rewarded with positive changes to public services in the borough.

Ruth’s evening out at the gig in Hayfield was cut short due to the MP’s early start the next day travelling to London to appear on BBC Breakfast to talk about poor mobile phone coverage in rural areas like the High Peak.

Addressing the issue of gaps in mobile phone coverage in the High Peak, Ruth met with major mobile operators to stress the importance of fixing unreliable mobile phone communications. Following the consultation, Vodaphone announced it would cover the town of Whaley Bridge, which was a problematic area for coverage in the borough.

Another recent noteworthy achievement of the High Peak Labour Party was the recent awarding of additional investment to the ambulance service in the area. Lengthy ambulance waits in the borough was a key issue raised when Ruth conducted a survey of local health issues in the summer of 2017.

Thanks to Ruth stressing the importance of additional funding, an extra £19m a year has been awarded to the region’s ambulance service with the High Peak getting 50 additional ambulance staff and more vehicles and equipment, allowing for quicker and more consistent emergency response times.

The High Peak Labour Party’s commitment to advocating improvements to different aspects of life in this Derbyshire borough, sees the team assiduously take to the streets, canvassing for support for the campaigns the party is involved in to bring positive change to the local community. And it’s the relentless canvassing, hard work and commitment to constituents that is contributing to the constructive change unfolding in the High Peak.

As Dale Jowett, bass player in The Beachcombers, said: “My first introduction to Ruth George was when she was canvassing for local council elections, she was the only candidate I saw on my doorstep. I find Ruth refreshing and her positivity is certainly not lost on me.”

Music-loving Labour supporters in the community are looking forward to another fun gig aimed at raising the money to keep the positive campaigns, changes and spirit of Labour riding high in the High Peak.

Gabrielle Pickard-Whitehead is a Labour member and freelance journalist in the Peak District.

View all articles by Gabrielle Pickard-Whitehead