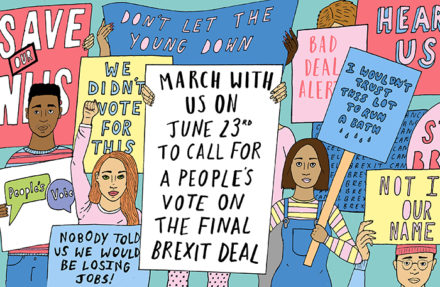 From its very foundation, Labour was established as a people’s party that would give voice to those excluded from power, wealth and opportunity by the elite and entrenched special interests. To create this new party, trade unionists joined with Fabian reformists and social democrats. We were not like the Tories and the Liberals, founded as organisations to support those who were already in parliament.

The world has changed fundamentally since our party’s founding conference in 1900. Then only a minority of men, and no women at all, had the vote. Nothing comes from nothing and every change in favour of the people had to be fought for, not just in parliament, but outside too. As a people’s party, Labour has never been content to leave it all to MPs and hope for the best.

Now, with Brexit, we are facing one of the biggest challenges ever to our values and our belief in the necessity and inevitability of progress. That has been added to by the sense that some have that we are trapped by a referendum verdict and that, they say, we have no choice but to see this through. How, after all, can the people’s party stand against what they feel to be the people’s will?

I think we should look back to our history for an answer. In the autumn of 1938, Europe stood on the brink of war as Nazi Germany demanded the annexation of large parts of Czechoslovakia. The Tory government cut a deal with Hitler at the Munich conference and there was no question of what the people’s will was then: Neville Chamberlain’s route back from Heston Aerodrome was lined with cheering crowds. There has been nothing seen like it before or since.

The establishment were united in their belief this was the right choice. Chamberlain was even invited on the balcony at Buckingham Palace to take the cheers of the crowds. With an election scheduled to take place in 18 months at most, Labour leader Clement Attlee could have chosen the easy path of backing Chamberlain. Who, after all, wanted war? But he took the path of bravery and, despite the very obvious “will of the people”, opposed the agreement. In doing so he made common cause with others who put the national interest ahead of party interest – of whom Winston Churchill was the most prominent.

History tells the rest of the story. In 1940 Attlee entered coalition with the Tories but insisted on a change of premiership. The very word “appeasement” now signifies moral and political cowardice. Being right also had an electoral reward – because voters will always respect a politician who stands up for what they believe in.

The choice we are faced with today is not the same. Brexit is not a question of war or peace. The country, too, is much more evenly divided than at the time of Munich. But one thing that Brexit does share with Munich is the emptiness of its promise. The Brexit people were promised is not going to be delivered.

That is why I will be out on the streets this Saturday supporting the March for a People’s Vote. I am not doing this because I want to defy the popular will or because I think those who voted for Brexit were stupid. And I am certainly not marching in support of elite government. I am marching because I believe that our party should always stand up for the people’s interests, even in the toughest of times and in the face of the hardest obstacles. I hope you will join me.