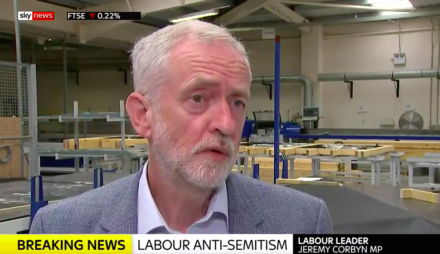 Jeremy Corbyn has said he was “present” but not “involved” in laying a wreath for terrorists linked to the Munich massacre of the 1972 Summer Olympics.

On Saturday, the Daily Mail reported that Corbyn had held a wreath at a 2014 tribute for Black September members.

Responding to the reports last night, a Labour spokesperson said: “The Munich widows are being misled. Jeremy did not honour those responsible for the Munich killings.

“He and other Parliamentarians went to the Palestinian cemetery in Tunisia to remember the victims of the 1985 Israeli bombing of the PLO headquarters, many of whom were civilians.”

Asked by Sky News today about the wreath-laying ceremony, Corbyn said: “I was present when it was laid. I don’t think I actually was involved in it.”

He added: “I was there because I wanted to see a fitting memorial to everyone who has died in every terrorist incident everywhere because we have to end it.

Jeremy Corbyn admits he was present at a wreath-laying memorial for Palestinian activists thought to have been behind the murder of Israeli Olympic athletes in 1972.

He said: “I was present when it was laid, I don’t think I actually was involved in it.”https://t.co/1ivAFHMWuP pic.twitter.com/4Xmqqa1dh1

Being “present” is the same as being involved. When I attend a memorial, my presence alone, whether I lay a wreath or not, demonstrates my association & support. There can also never be a “fitting memorial” for terrorists. Where is the apology? https://t.co/TNQpCs6mN2